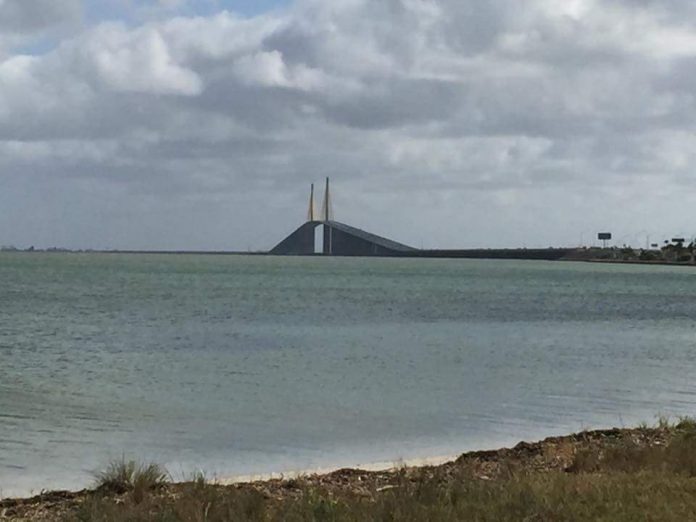 It was a somewhat rainy week in the Tampa Bay Region, but anglers enjoying the cooler temperatures caused by cloud cover still had plenty of action at the Sunshine Skyway Fishing Piers.  Mangrove snapper were on a good bite for anglers fishing the reef & main bridge structure on multiple tides.  Gag grouper remain very active, and this week saw anglers catching & releasing large numbers of both legal & short fish ahead of the regional opener.  Spanish mackerel were around and still remained on a deep bite despite the fact that baitfish schools are beginning to surface more than they have thus far this season.  Large & small sharks – especially blacktip & sharpnose – are providing great entertainment value for pier visitors seeking their first saltwater toothy critter.  Large schools of tarpon are rolling along both pier spans – especially during the lower tidal flows that occur at each tide change.

Baitfish activity around the piers this past week included both threadfin herring & scaled sardines, but sardines continued to hug the bottom while the threadfins seemed more willing to surface.  This made the sardines appear more elusive despite the fact that schools were present.  Pier visitors largely prefer sardines because they will live so much longer in a bait bucket whereas herring are difficult to keep alive.  Both species are excellent both live & cut for just about everything that visits the piers.  Sardines will live longer in a bait well and have a firmer flesh, but herring have more oil & scent.  Kept on ice in a plastic zipper bag, both are great cut baits for a variety of species.

Mangrove snapper remained good at night and some very nice fish were also taken during daylight hours.  Most of the seasoned snapper hunters at the piers fish after darkness falls, but plenty of fish are also taken in broad daylight.  There are shadow lines at the piers during every part of the day and these include main bridge pilings, closed pier span pilings, and the area directly underneath the pier itself.  Fishing shade & shadow lines during the day is a great way to connect with great action.  This applies not only to mangrove snapper, but also to grunts, porgies, and spotted seatrout.  Many nice snapper limits were taken by anglers this week, with the folks adding some nice grunts, lane snapper, and seatrout into the mix.

Spanish mackerel showed with increasing numbers of 20″+ fish this past week.  Late afternoon time frames were best and anglers continue to fish deeper than a typical season at this point.  Some anglers did take full limits, but most reported 4 or 5 really nice & fat fish, and were not concerned about bagging a full limit.  Silver spoons & Gotcha lures fished deep were one great method of attack, and even free-lining or corking live shrimp was very effective.  Aluminum-bodied silver spoons fished behind a 2 oz. – 4 oz. trolling sinker will generally out-fish the nickel-coated steal or brass variety.  The lighter weight & additional flutter allows them to be more easily mistaken for the flash made by the baitfish schools macks are seeking.  On a great mackerel bite, these fish will hit almost anything, but watching tides, lure action, water clarity, and sunlight penetration can make a huge difference in mackerel success rates

Sharpnose sharks began to cruise the surface in noticeable numbers and this past week was exceptional for this species.  Many pier visitors caught their first shark this week and the sharpnose was one of the main culprits reported.  This species is common in the Tampa Bay Estuary and slightly changes in appearance as it grows.  Young sharpnose sharks have plenty of attractive white polka-dot-like spots along each side of their body.  As the fish matures, these spots either diminish or completely disappear.  The pointed nose of this species is a telltale identification sign, but the Florida Fish & Wildlife Conservation Commission (FWC) has a handy shark identification guide available for anglers in both online & printed materials.  The sharpnose shark is a fine-eating species, and can be grilled, broiled, sautéed or deep fried.  The fish should be bled upon catching and kept on ice in whole condition until final cooking preparations begin.

Offshore fishing will be strong for awhile