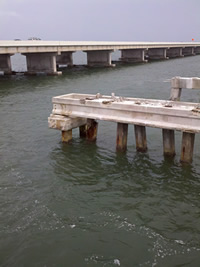 Independence Day came and went just like passing thunderstorm systems in the Tampa Bay region, but lots of hot summer bites were popping off at the Sunshine Skyway Fishing Piers.  Gag grouper were finally on a hot bite when it came to keepers, as multiple legal-sized fish were shown to your author this past week.  Mangrove snapper were good as well, and plenty of nice fish came during the day, while some of the real monsters came mostly at night.  Spanish mackerel were both hot & cold this past week, and a switch to natural baits seemed to spell many more fish for certain anglers.  Shark action is simply outstanding, both for light tackle toothy critters and some real monsters over 8 feet in length.

Gag grouper seemed to get fired-up this past week, with many legal-sized fish being reported.  The most interesting aspect of those reported were that many fish were taken on natural dead baits, whereas most often live free-lined baits or plugs often produce the most gags.  One angler explained that he liked a large dead threadfin hearing with just the tail cut off to provide extra scent.  Another successful visitor was using whole squid parked on the bottom near the reefs.  It could be that gags this past week were less aggressive, but willing to eat large, fresh baits right in their vicinity.  Live pinfish or plugs would require more energy to capture.  Most legal fish seen by your author this past week were around 25″, but there were reports of a very big 32″ fish as well.  Most anglers were targeting the artificial reefs on the outgoing tide, but some were fishing main bridge pilings on the incoming tide.

Mangrove snapper remain one of the top targets at the piers in the summer months and this week produced some very nice fish in the 11″ to 17″ size range.  Cut scaled sardines & threadfin herring were the top producers, but live or freshly-frozen shrimp was also good in areas where pinfish could be avoided.  Anglers were using 1/0 to 2/0 black nickel circle or octopus style hooks to target the often-wary snapper.  Both sizes & styles allow a 1″ square cut of bait to completely cover the hook itself.  You can fish circle hooks on a standard live bait style rig or knocker rig, but the key to this hook is to never ‘set’ on the fish.  Let the snapper (or other species) put a nice bend in your rod tip before you even start to reel.  Octopus style hooks still require setting the hook, but their design does seem to assist in hooking snapper.  The artificial reefs, bridge pilings, and even underneath the pier itself were all locations that produced this past week.

The Spanish mackerel fishing really turned on to natural bait presentations this past week.  Plenty of nice mackerel in the 15″ to 18″ size range were taken on cut strip baits presented with a variety of methods.  The strip bait mackerel method at the piers is very simple.  Start with scaled sardines or threadfin herring.  Use long shank hooks in the 1/0 – 2/0 range instead of any wire leaders.  Use monofilament or fluorocarbon leader material in the 20 – 30 lb. size range.  Go with weighted floats if mackerel are near the surface or a few split-shot sinkers if they are deep for depth control of your bait.  Cut the bait strips so they are long and slender, and then hook them just barely at one end so they flutter, twist, and turn in the tide.  Long squid strips or shrimp can be substituted if baitfish are unavailable, but the fluttering action is important for any bait choice.  Rods can be simply held or even set down on a light to medium drag setting because mackerel often hook themselves when using this tactic.  This week the mackerel seemed to be deeper in the water column, so a split-shot or two helped with catches.  Depth is critical in the natural bait game and anglers must be willing to change approaches to hit the entire water column based upon fish location.

Summer shark fishing at the Sunshine Skyway Fishing Piers can be absolutely spectacular, and the bite is certainly approaching that level.  Many visitors from outside of Florida (or non-coastal Florida residents) are seeking to tangle with a shark during their visit.  The light tackle bite has been outstanding this week, with blacktip, sharpnose and bonnethead sharks providing the action.  Every summer in the Tampa Bay Estuary sees some monstrous sharks and they have arrived.  The past 7 days have seen bull, lemon, and nurse sharks exceeding 8 feet in length at both fishing piers.  Some of these fish reportedly were over 10 feet in length.  Most anglers were dropping a cownose ray, ladyfish, jack or bonito on the outgoing tide and using a balloon to move the bait out with the tidal flow.  Almost all big sharks caught at the piers are released to fight another day.  This serious group of anglers is seeking just the battle and the comradery of sharking.

Cool off, bring home a tasty dinner with scalloping