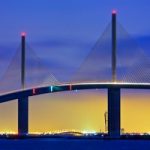 In what almost seems like a yearly occurrence in the Tampa Bay Estuary, schools of bluefish & ladyfish have begun to demolish small baitfish schools at the Sunshine Skyway Fishing Piers – especially in the evening hours.  Spanish mackerel remained on a good bite for this time of year and anglers fishing deep reported some late-day catches of mackerel in the 20″+ size range.  Mangrove snapper continue to be strong options – especially after dark – as these fish approach their best sizes of the season.  Nice blacktip sharks seem to be everywhere and were common catches on both piers and much fun for anglers seeking both a nice fight and steaks for the barbeque grill.  Big lemon, nurse, and bull sharks were common as well for the more heavy tackle anglers, as were goliath grouper.

Bluefish & ladyfish schools have arrived at the mouth of Tampa Bay, and that is welcome news to pier anglers who cherish both species for their aggressiveness, sporting qualities, and culinary options.  Bluefish & ladyfish were attacking schools of fingerling-sized scaled sardines along both pier stretches over the past week.  Both species seemed more aggressive after dark.  At times you could hear the surface strikes in the nighttime and and many were caught near the tollbooth areas & bait shop areas.  Cut strip baits caught most of these fish, but many anglers were tossing artificial lures as well.  Bluefish have a very firm (yet tasty) flesh and this species does have a rather dark lateral line, and thus should be immediately bled & iced to ensure the finest table fare.  Ladyfish should be frozen for about an hour, filleted, and then the flesh scraped with a spoon to avoid the bones.  Roll the flesh into some bread crumbs & seasoning and then deep fry the fish patties.  Both fish are also excellent baitfish options for many species at the piers.

Spanish mackerel remained deeper in the water column, but were still on a very solid bite for this time of the summer.  Anglers fishing spoons with trolling weights ahead did quite well, as did those fishing cut bait with sinkers in front.  Outgoing tides were best, but some anglers fish the open portions of the old pier section with great success during incoming tides.  To work a spoon deeper in the water column, employ a lift & drop approach instead of high-speed burning the lure at all times.  When mackerel are slamming top water baitfish schools, then rapidly retrieving is often best, but baitfish have been deeper this season and a slightly slower approach has excelled.  This might change as we get closer to the fall fishing season and baitfish schools rise.

Action for medium-sized sharks of many species was excellent this past week.  Lots of blacktip, sharpnose and nurse sharks in the 3 ft. / 20+ lb. size range were landed by anglers.  The overnight and first light hours seemed to garner the most bites, but many baits were soaked right in the heat of these August days and still produced.  Medium-sized sharks (those in the 10 lb. – 30 lb. range) are among the most fun fish to catch at the Skyway Piers.  You do not need massive tackle, fighting belts, or 2 hours of time for a battle.  You most often get a very fun fight and an excellent eating option for the barbeque grill.  Your author prefers blacktip & sharpnose sharks for the grill.  Bleed the catch immediately, but keep the shark itself in whole condition until your fishing outing has concluded.  Steak or fillet and brush with olive oil and your favorite seasonings.  Fresh shark steaks from Tampa Bay are great eating.