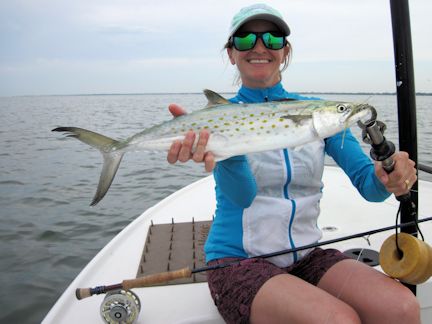 Despite the red tide algae bloom on some Gulf Coast beaches receiving huge media attention, the waters around the Sunshine Skyway Fishing Piers continued to produce both bait and excellent fish catches.  Indeed, some visitors from struck beaches to the south found the piers a great place to get some fishing into their visit to the Sunshine State.  Spanish mackerel were on an excellent bite this past week and anglers fishing certain tidal & daylight windows were catching some mackerel limits.  Blue runners were prevalent and ladyfish also joined in baitfish attacks and both were often caught alongside the mackerel.  Mangrove snapper & gag grouper action was great, and many of these fish were fit for the cooler.  Snook remained on a solid bite in the shallows.  Shark activity was high and many visitors caught their first toothy critter.

Outgoing tides produced best this past week, but plenty of fish were still caught on the incoming tide as well.  Smaller scaled sardines were again prevalent and this caused many mackerel to rise in their feeding.  This provided an opportunity to fish with floats to keep the lure or bait higher in the water column.  Some macks exceeded the 18″ mark – a size range where this species really begins to fill out in girth.  Gotcha lures, spoons, jigs, straw lures and larger sabiki-style baitfish rigs were the primary artificial lure choices.  Small to medium-sized scaled sardines were a close second choice to the artificial lure choices.  Anglers that stayed on the move performed the best on mackerel as schools seemed to be on the move.

Most anglers who target Spanish mackerel do not consider this species to be a common feeder after dark, and they are certainly right to an extent.  Mackerel mainly feed by using sight, water clarity and light to their highest advantage, but there are times where this pattern is challenged.  When mackerel are feeding on baitfish schools as sunset passes and then twilight sets in, some of these fish will indeed continue to feed and thus be vulnerable to anglers even after darkness falls.  The presentation most successful for these fish could not be simpler.  It consists of perhaps 24″ of monofilament or fluorocarbon leader material in the 25 lb. range, a long shank hook in the 1/0 or 2/0 range and a float or split-shot sinker for depth adjustments.  Use scaled sardines or threadfin herring kept on ice in a zipper bag for bait and cut slender strips from the belly and/or back section(s).  Hook the cut bait strip right at one end so it flutters with the tide and deploy it in a free-lining method.  It is likely that snapper, ladyfish, and bluefish will also succumb to this method.

Mangrove snapper and gag grouper were both aggressive this past week and many visitors fishing the artificial reefs had nearly constant action from these species.  Many catches of both species were reported, though plenty of gags were below the legal size limit imposed by the FWC.  Anglers did not seem disappointed that they had to release some fish.  Of course not all fish were small – with plenty of mangrove snapper iced for family fish fries and even some big gags pushing the 30″ range taken.  Many visitors reported moving only slightly upon their chosen artificial reef section or switching baits in an attempt to entice larger fish.  A whole squid parked on the bottom with a live bait rig right off of the reef line tempted some grouper, as did free-lining live pinfish & pigfish.  Diving plugs are beginning to take more gags as well.  Snapper have been hot on the smaller live or freshly frozen scaled sardines that are so prevalent at the piers right now.

Snook have been very active along the approach sections of both piers this past week.  Fish can be both spotted and caught all day long, but the hours after dark represent the best shot at landing & releasing a trophy class line-sider.  Snook absolutely love the rock retaining walls that line the entrance to each pier right by the tollbooths.  These are virtually untapped spots, not only for snook, but also for spotted seatrout, snapper and even grouper.  Free-lining a live shrimp or scaled sardine in these areas is one sure way to connect.  Artificial lures ranging from jigs & soft plastics to plugs all take fish – and even tempt some of the monsters.