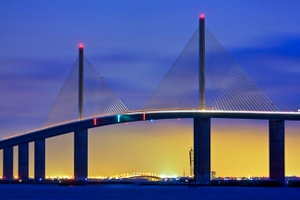 Big jack crevalle bucked the conditions & daytime temperatures this past week as heat could not stop these fish from settling in for a very strong bite at the Sunshine Skyway Fishing Piers.  Many visitors were shocked at the pure power of these bulldogs of the sea.   Gag grouper were going good as well, with lots of action from smaller fish and a few very nice legal fish taken this past week.  Mangrove snapper and Key West grunts are also going strong on the artificial reefs that line the piers.  Spanish mackerel were spotty but available for anglers willing to stay on the move. Sharks and rays remained desired targets.  Pompano action has also been reported along the approach sections and even further out along the spans for anglers targeting what many folks consider one of the finest-eating fish in Tampa Bay.  Bluefish, blue runners and ladyfish remain strong bites as well.

Big jacks were easy to spot as they tore through schools of small scaled sardines and boiled the water around baitfish schools.  These were very large fish, with some in excess of 15 lbs. in weight.  Live or cut sardines produced fish, but plugs & poppers did just as well.  While many anglers consider standard floats & popping corks devices used only for presenting natural baits, that notion does not apply to surface or just subsurface feeding jacks at the piers.  The float is simply a device in this scenario – not for bite detection – but instead to allow you to present a lure or bait closer to the surface and attract a jack away from the school.  These big fish literally destroy tackle, and that happened a few times this past week.

Spanish mackerel were really on the move at both fishing piers this past week and many anglers willing to stay on the move as well performed nicely on these fish.  Gotcha lures, spoons, jigs and larger sabiki-style baitfish rigs were the baits of choice because schools would move along the pier span and artificial lures allow for quicker movement from spot to spot.  Live or freshly frozen scaled sardines, threadfin herring and shrimp can also be used once a school of mackerel has been discovered.  Sometimes the mackerel remained in one area long enough to place several set rods.  One great approach is to have some rods rigged with artificial lures and some rods rigged for bait fishing.  Once fish are located, set a bait rod or two alongside yourself as you continue to fish lures.  A medium-light spinning reel on a slower action rod set at medium drag will hook many fish before you even pick up the rod.  A slower action (meaning the rod loads up midsection) versus a fast action (meaning the rod loads up just below the tip) is more effective for set rods because often fast traveling mackerel will rip baits from a fast action rod because pressure is immediate.  In essence, the slower action just provides an extra second for the fish to get the natural bait offering fully inside the mouth before pressure is felt and the hook sets.

The artificial reefs that line both fishing piers have remained good options for Key West grunts, mangrove snapper and gag grouper.  Mangrove snapper were very active on freshly cut scaled sardines, threadfin herring and shrimp.  Some very large Key West grunts have been taken and these are also fine-eating fish.  Anglers seeking mangrove snapper took some full limits of fish.  Gag grouper have also been active – and more numbers are hitting large diving plugs on an outgoing tide.  There were plenty of reports of shorter gags, but also some nicer fish over 26″ taken in recent days.  If you are working plugs along the reef, you can also set a bottom rod with a lively pinfish or blue runner.  Sometimes a fish that misses on a plug will be taken shortly thereafter on a lively nearby bait.  Most of the nicer nice grunts were taken by fishing cut strips of squid or whole shrimp along the same reef lines as the snapper & grouper.

Pompano have been reported along the approach sections to each fishing pier – going up to and just past the first parking areas.  However, this past week saw some fish taken much further out on the piers.  Many fish were short of the required length, but enough visitors enjoy cooking this species that it was worth sorting through smaller fish for a few keepers.  Fish were taken on both incoming & outgoing tides.  Banana-style swim jigs ranging from 3/8 oz. to 3/4 oz. (depending on the tides) were most effective.  Chartreuse, pink, white and yellow were all popular colors and many anglers used a teaser fly – either at the jig or on a dropper line above the jig.  Jack crevalle, bluefish, blue runners and even mackerel were all taken by anglers as they pursued pompano.

Focus on mackerel while waiting for fall kingfish run