Thank you for reading this short Titusville Fishing Report. Still not a great deal to report, unfortunately. Lots of rain and lightning this week!

Took a short stroll down memory lane this week. Jeff Weakley sent me a Florida Sportsman, November 1987. In that issue was the first article I ever had published.

John Kumiski, back in the ’80s. Love the Medalist!

I keep a basket of magazines in the bathroom because the laptop is not very convenient. Picked out an old Tide magazine, November-December 1997. Son Maxx was the cover boy.

Monday- Launched the kayak in the Mosquito Lagoon armed with a six-weight. Went looking for redfish. The water was high and dirty and such fish as there were, were hard to see. I had one primo shot at a fish cruising along the shoreline and did not make the cast. Poocher!

Wednesday- Launched the kayak in the Indian River Lagoon armed with a six-weight and a spin rod. Found a few baby tarpon rolling. Tossed the chartreuse sparkle three-inch shad a few times and jumped one maybe seven, eight pounds. Got it close before it threw the hook.

Tried the fly rod with a black bunny leech. Threw it a few times and hooked another maybe five pounds.

I turned around and there was a squall line about a mile away, coming fast. I raced it back to my car, not coming close to beating it. No lightning, though.

I’d wreck my ears for this all day long.

“The solution to any problem- work, love, money, whatever- is to go fishing, and the worse the problem, the longer the trip should be.” – John Gierach 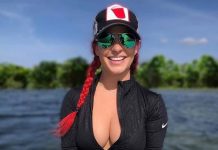