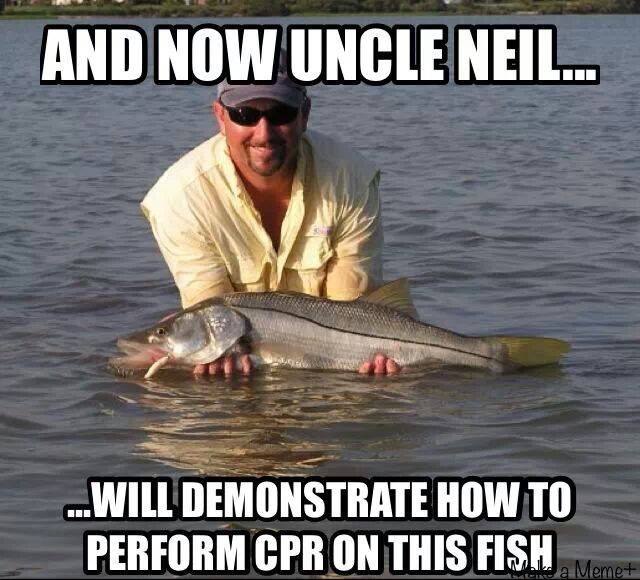 Hold the fish horizontally using both hands to support the weight, especially the big ones.Proper fish handling- A subject I have discussed for many years. Not every angler practices it, yet I never get anyone to show up to debate me publicly. 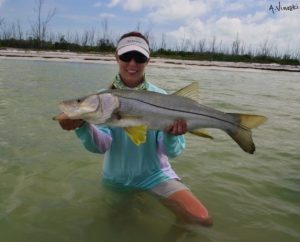 But I know the reason why. It impossible to deny that using the best possible handling techniques is easy to implement. And why wouldn’t people want to give a released fish the best possible chance of surviving the encounter?

It is reasonable to easily have the best of both worlds: get your great photograph, and release the fish with the realistic expectation that it can survive post-release predation. That part -predation-  is something that is missed by a lot of anglers. It is a topic that I talked about regularly in better times, but three and a half years after the massive freeze-induced snook kill, every healthy fish that remains in the population is extremely important. The lessons are applicable to many species and the hope is that people are open-minded about evaluating their own techniques for all species they handle then release.

This subject of better release techniques is one of the best education opportunities inside the sport of fishing- you cannot fault people for what they do not know. There are varying levels of knowledge when we address people in the fishing world but the messages can be helpful to everyone. Beginners embrace the philosophies. Other anglers who have never been exposed to the concepts can also benefit from the technique changes (as do the fish they catch and release).

Reviving your release, before AND after you snap a pic, will increase survival.One example is the handling of fish “for a weight.”   Larger fish, specifically but not limited to a species like snook, being hoisted up by the lip puts stresses on the fish that can create lasting damage or even death. We unfortunately routinely see fish held like this for photos, with the anglers’ other arm not being utilized to provide better support. Best practice here suggests the angler should incorporate a lift where the weight of the fish is not on the lip and jaw of the fish – support the weight with your other hand and hold the fish horizontally. Take it a step further and skip the actual weighing process all together. You can take a length measurement while the fish is still in the water. FWRI developed a chart that gives very accurate estimates on snook weight based on the length of the fish. So skip the potential harm a bad hold creates and just get a length measurement instead. 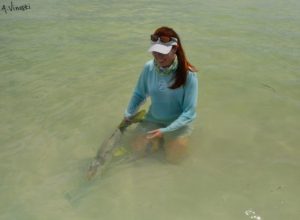 Another thing that would be positive for people to incorporate: revive your fish prior to the photograph. After the removal of the lure/hook and the fish is placed gently down into the water, hold the fish facing into the current or slowly and gently move the fish forward to run water through its gills. Avoid erratic movements. It may be a slow process with fish that were played out to exhaustion. When the fish is ready to swim away, you will know it and release the fish.Editor’s Note: Neil Taylor is an avid conservationist and the owner of Strike Three Kayak Fishing, located in the greater Tampa Bay region and surrounding waters. He can provide plenty of opportunities for seasoned anglers, as well as on-the-water instruction for those new to the sport. Visit his website at www.strikethreekayakfishing.com.

Perhaps the biggest offense is when fish that are kept out of the water for excessive periods of time. Try this moving forward: keep the fish in the water until the camera is prepared. Then get the photo quickly and then place the fish back down in the water.  Lift the fish with good support, snap the photo and then return the fish to the water for any additional revival.
Ron Taylor, the lead snook biologist with Florida Wildlife Research Institute (FWRI) says “Fish that struggle intensely for a long time during capture are usually exhausted and stressed from the accumulation of excessive amounts of lactic acid in their muscles and blood. Severe exhaustion causes physiological imbalance, muscle failure, or death. Therefore, use the proper weight-class tackle; land your catch quickly, and when possible, leave the fish in the water while you release it. Any exhausted animal needs oxygen to recover!”

When safe, jumping overboard for your photo and release reduces trauma on the fish – and can make for a more interesting photo to boot.These simple steps might save the snook you release, that is obvious. Yet not every angler who releases their fish follow through. The “critics” mentioned above will not take extra steps to care for a fish but they will say “it swam off.”   Having been down current of fish that were deemed “good release,” I can attest that many of these fish do not survive. Left with little chance of evading a predator or just too beat up to survive, these fish are removed from the population, which defeats the whole purpose of the release.

Other actions that are tough on the fish: dragging them up onto the sand or rocks, dropping them hard on the deck of a boat, lifting deep hooked fish up by the leader. Seems obvious but we’ve all seen it. Any action that causes extreme trauma or removes protective slime reduce the chances of the fish surviving the encounter.

The big picture, these are recommendations that rely heavily on common sense in fish handling. Why not eliminate potentially harmful practices from your fish handling technique? Ethical Angling is something that becomes more important with many growing pressures on our resources. Taking the initiative to incorporate a better Fish Handling Plan is a “win win” for everyone.

the Meatheads of the Week