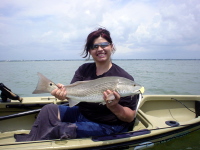 Tough times for anglers all over the region.   Another tough set of January weather conditions.  The wind has been dreadful a lot of the time.   And just as I thought, the worse it got for all of us living here, the more opportunities at the top-of-the-Bay.   In fact, the only strong reports have been in the upper stretches of the Bay.   Lots of fish have pushed back to the most distant areas from the mouth of Tampa Bay to try to survive in a dismal weather pattern with cold fronts every few days keeping air temperatures low and bringing water temperatures down.

Redfish, trout, sheepshead and black drum:  In the canals, under docks, eating whatever you can present to them that is either stationary or barely moving, this is something that has been done successfully and may continue to be a good choice UNLESS we hit a major warming trend that brings these fish out of their cold weather habits.   There is a good forecast starting tomorrow and extending six days: But how much is needed to get things activated for catching fish on lures like normal?

The treasure lies in the adjustments.   The people using lures will still be successful if they really pay attention to technique.  Lures worked rapidly will get nothing.   It is good in the upper Bay and it is going to get better.   I expect great opportunities through June.   But I expect a hotbed of action with just a little bit of Spring winning out over this dreadful weather we have had since late December.

Throw lures around oyster bars.   In the dead of winter, the best fish are around the oysters north of the Gandy Bridge.    Go deeper at lower tides.    But work the oyster bars when the tide is up.

See ya the next time around.    As always: Be careful out there!