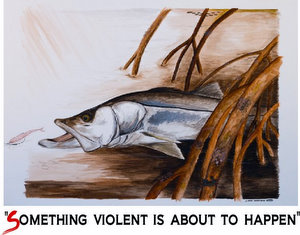 What’s happenin’ in the upper stretches of the Bay?    Some pretty good action actually!   It has been a longer period of time since the last report because, quite honestly, fishing trips nearly every day and three to four seminars per week, I didn’t have a great deal of desk time.  North of Gandy, just a couple of months left of low enough water temperatures where this is an option.   It gets to late May, I won’t go up there anymore.

Redfish are probably a better target up the Bay than anywhere else.     The baitfish surge made it most of the way up the Bay even though the much bigger concentrations remain on the coast or at the mouth of Tampa Bay.  The 12 Fathom Mullet is my favorite bait.    On a 1/8-ounce jighead, deadly when moved the right speed.    The second place choice is the Buzz Tail Shad.

Trout action is very good in specific locations.  The jigs continue to work the best but topwater action should be about to explode.   The SlamR continues to be the best finesse bait for big trout but with the return of baitfish they will readily slam the Mullet as well.

Sheepshead and drum are also possibilities.   Rounding out the action, ladyfish and even some jacks have returned.   Flounder and mackerel will be the next to show, having been caught near the Skyway, their trek up the Bay is imminent.

Fasten your seatbelts:  This good action will get even better!  Another two months of opportunities before things get hotter and the Upper Bay, less of a location of choice.

See ya the next time around.    As always: Be careful out there!

Coming soon:   A kayak by Neil Taylor.   The mold is being made.  We are designing a winner.    Coastal Mojo, The Fishin’ Magician.   Stores will carry them.   Direct purchases will also be possible.  The details will be made available soon.   The design is like no other.    The decisions, making a boat that fits the market.   Making a boat that fills a gap in the market.   Comfort.  Stability.     Affordability.

At the request of my contemporaries, “keeping the message alive”:    If you catch a snook:  don’t take it out of the water for eight minutes taking pictures.    Don’t “get a weight” of the fish.    Enjoy the species if you cross paths, but take extra steps to make sure those fish remain in the living population.     A huge contingency of the best respected fishing guides on the Gulf coast opposed their decision to reopen to harvest, made sincere pleads over and over to get the decision reversed but were ignored.  Do your part and try to give this species a chance to return to prominence regardless of their faulty data and poor decision making.  A released snook not harvested preserves the future of our species, one that could face stresses like algae blooms and another freeze.