I had not left the Tampa Bay area, other than to go over to the lure factory, since August 2010. It was a time to escape the routine and to go to an area that my Dad took our family to for vacation all my pre-adult years. The drive up the Nature Coast then past the Big Bend and into the Panhandle landed me in Port St Joe, FL. I spent the entire week staying on Cape San Blas. I saw brilliant sunrises, explored some new areas but I also did a lot of lazy-man-porch-sitting. I never wandered past Port St Joe and really didn’t do as much “water time” as I did in all those years of vacation time there. I noticed that I was in a lot better morale on the drive home than at the beginning of the trip, which was the goal.

On the drive up to the area I was doing some math in my head. I figured that, over the years, I had probably put in roughly 120 days fishing in this area- usually with my Dad and/or my brothers. With my everyday routine as a fishing guide, I would say that I was relaxed and concentrating on the natural beauty of the area without the distraction I had in those earlier years “getting after” the flounder, trout and redfish that are in these waters. Then again, I started to realize how much you wonder about other people fishing when you are not doing it yourself. 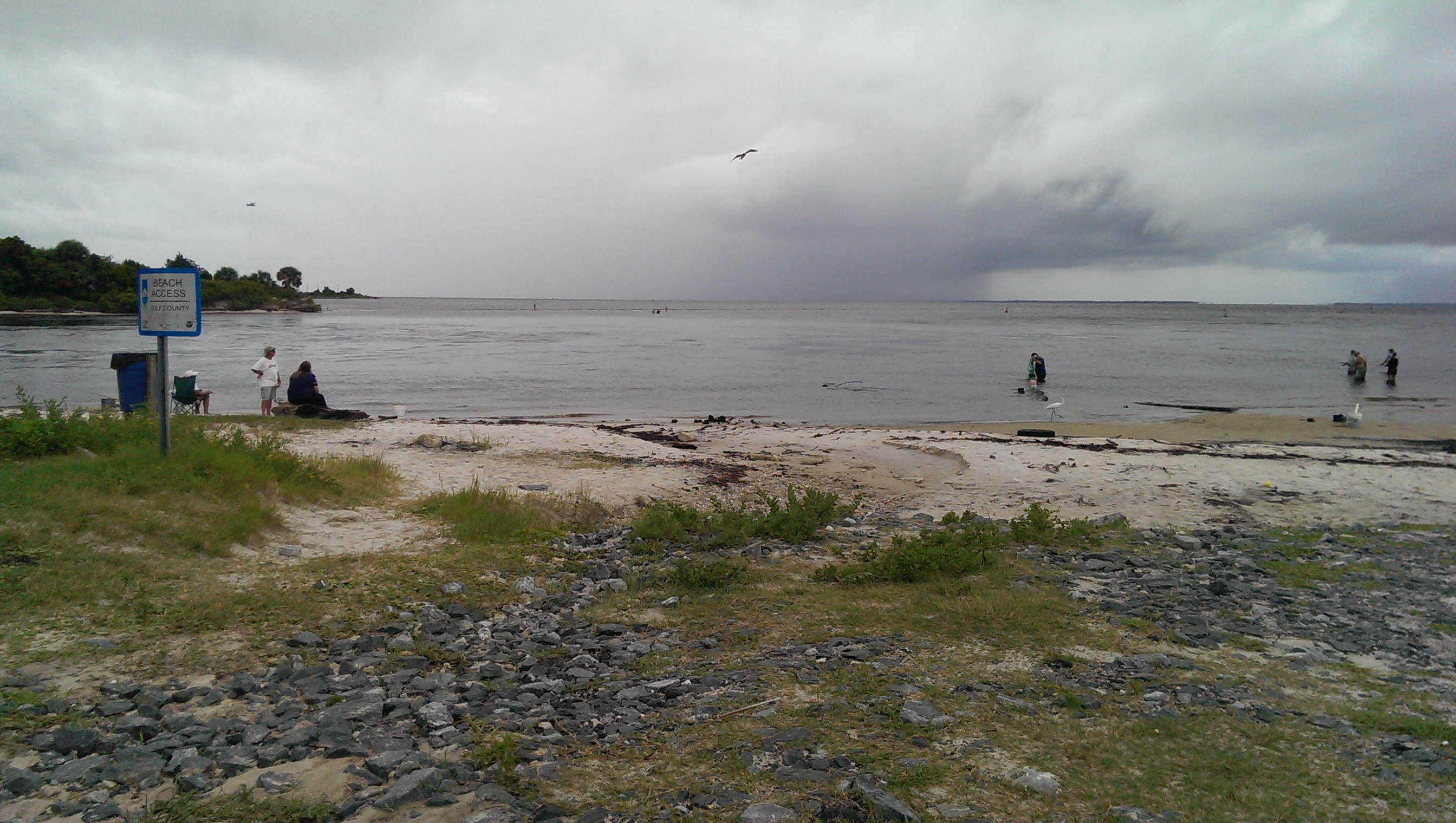 After five hours on the road to get up there, I was drawn to fish “the bridge” and with a falling sun, standing in the water and remembering all trips past in that location, it was a nice way to ease into town. The shoreline had been ultimately unchanged all the previous years of going there but this time it was obvious that Tropical Storm Debby shifted some things around. One large boulder that was a beacon of the spot was mysteriously gone. Heavy rains for nearly the entire time since Debby, the water was very murky so I didn’t tread in that area to see if I could find it but it was odd not to see it poking out of the water any longer.

I had a little action that first afternoon, catching one oversize redfish and a huge ladyfish before heading off to go check in with my vacation host. My host, Mark Hartley, a man I know from the www.capmel.com forums. When I arrived at his incredible property and house out on Cape San Blas, he was wielding a fillet knife and when I walked over and flipped over the cooler lid I knew what was for dinner.

Going up to the middle level of his house, we sat on that deck and admired a beautiful view of the other properties, the beach and a setting sun. He was able to point to the spot on the Gulf of Mexico where he caught them. Fighting the steady thunderstorms most of the days of his three weeks at his property, he enjoyed sharing his haul. I believe it was a mangrove snapper picatta that he prepared that night. In addition to that, he and his girlfriend Elia also had a pasta dish with some sausage made from a hog he shot. This was literally some “Old Florida” living.

There were other great treats. Mark put me in charge of making the fish spread, out of king mackerel he had smoked. I put together my own mixture and it was the pre-dinner appetizer the next couple of nights. Mark’s house is a stilted structure with many levels. It is a rental property that sleeps up to 14 people. The outside shower is perfect for the beachgoers or the fishing people. As I have done other places I’ve been with this setup, I never actually used the inside shower and just left towel and clothes on the bottom patio level. I would say that for anyone who wants to do a getaway “on a tankful” they should remember this option. For accommodating a larger group in a quiet beautiful scenario, this is going to be a great choice for a lot of people to enjoy. 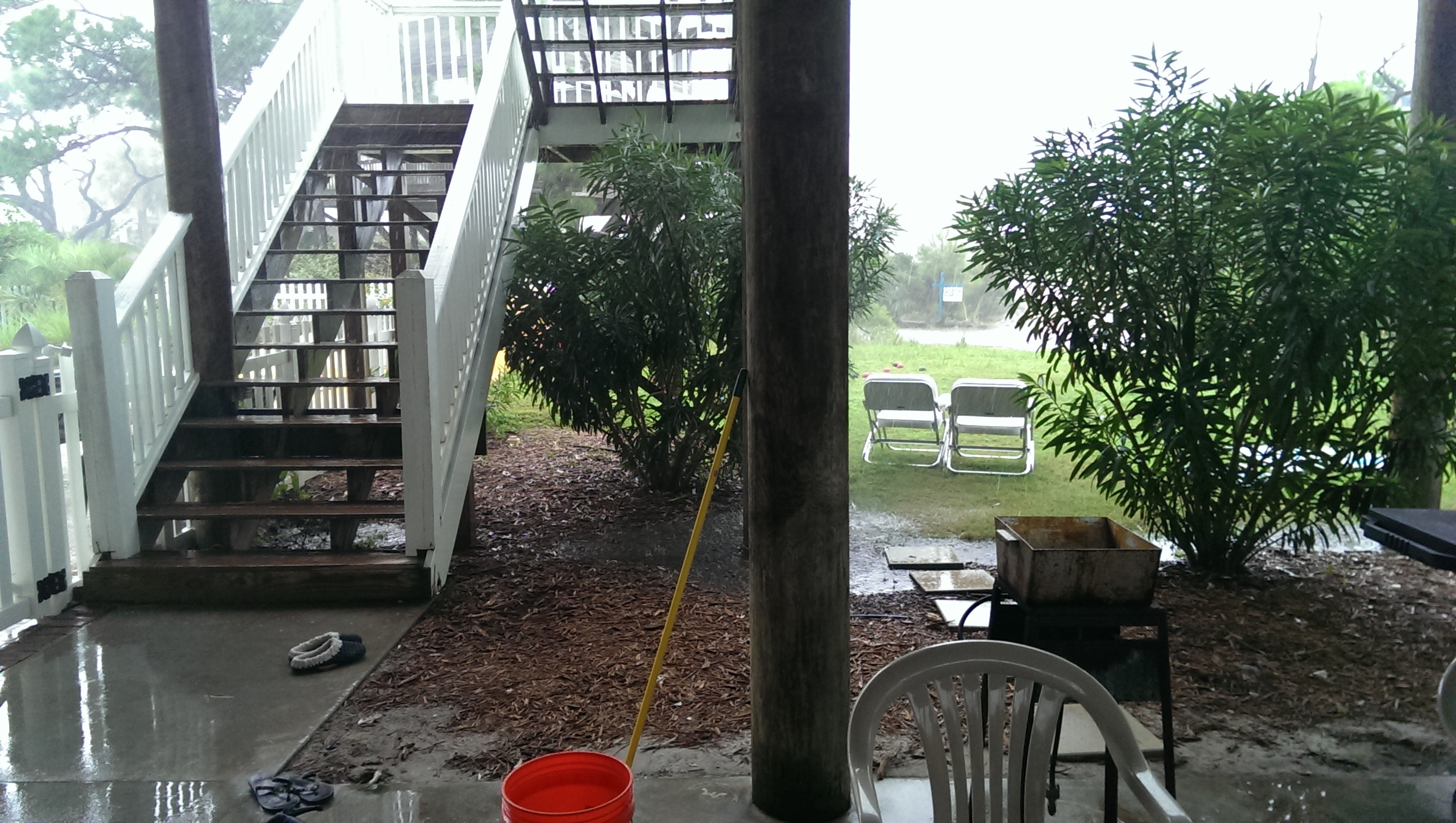 In non-fishing mode most of the week: I talked to locals, some that have been here all their lives and others that have come from other places. There are fantastic stories to be heard all over this world. Pretty tame activities for me most of the week. I did some extensive “shade sitting” and even spent some time taking in “Shark Week” but that did not scare me away from the water. Relaxing, mostly I missed my Dad and Mom, both sitting back in Arizona, awaiting nightly reports. Perhaps the best part of this trip was that cell phone service was there, but limited. From the upper floors of Mark’s house, I could make calls so it was not complete isolation. I brought along my computer, in case I had to post guide reports to capmel.com. I conveniently forgot the mouse, rendering my computer useless but adding to the relaxation factor.

I got to do a sunrise outing earlier in the week with Native Watercraft guide Robert Baker. I missed seeing Rob on my drive in, when I stopped at his business “TnT Hideaway” in Crawfordville. I met his Mom there, but missed Rob.   That night, he called me to set up a morning out on the water. He arrived well before dawn after an hour and a half drive over to Cape San Blas. I had a password code incorrect so we were unable to launch from inside a state park that we had as our preferred location. Instead, we shifted to another location a couple of miles away. A baby alligator scurried off when we arrived, something I’m not used to seeing around salt water in the Tampa Bay area. Rob said “there’s a small shark right over there.” After I looked, I was wondering what a big one would look like, because this looked like a six-footer in about a foot of water. It was a beautiful morning. Miles of spartina grass shoreline and it looked like a great location to catch some redfish. Rob managed the only one. We threw noisy topwater lures and I eventually caught two trout and a ladyfish. Rob also caught a bluefish. We cut out early (a theme, especially when I’m on “vacation”) and went into Port St Joe. We visited a large tackle shop there and then had lunch looking across the Bay. We talked about getting back out again as I would be driving back past his area on my way back home. 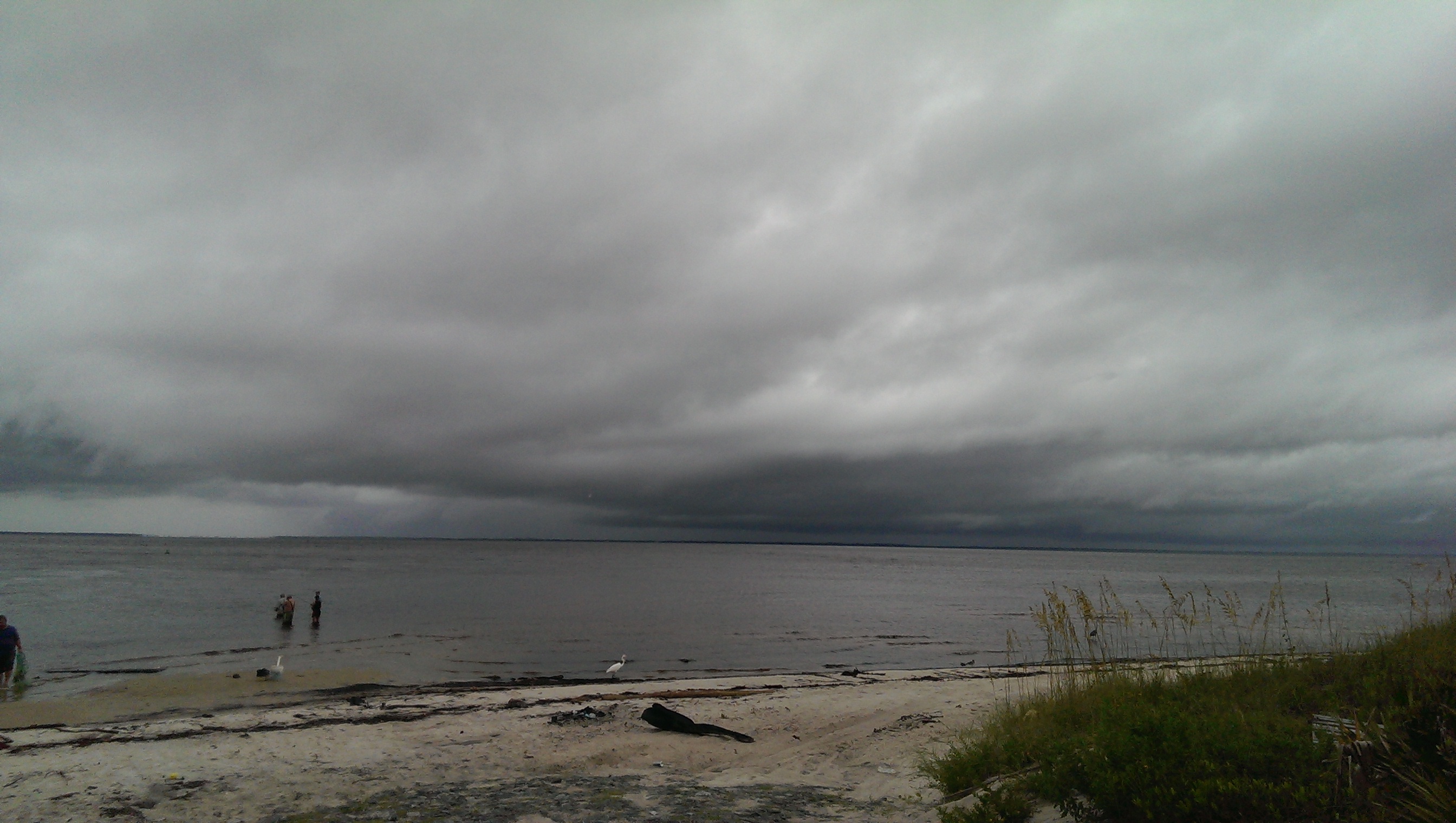 Toward the end of the week, I went “into town” (which is funny because it is probably three shops total and while it was a major outing during my week; I walked all aisles of the biggest store in under 40 seconds). While I was in the parking lot, a car pulled in with two Native Manta Ray kayaks on the roof. The man had his wife with him and after a slight pause looking my way, over he came to admire the two Native Ultimates I had on my roof rack. He went into a story about how much they love the boats and started to talk about how they chose them. He said how he had extensive conversations with “this guy” and did research, tried the boats and then bought them “best purchase we have ever made”. In his first pause after that I said “You are from just north of Atlanta, right?” He just looked at me for a few seconds and so I said “By the way, I am ‘that guy’.” He and his wife were really excited at the chance meeting and while we were talking, I asked them if I could make an adjustment to one of their kayaks. Using a knife, a lighter and a new piece of bungee cord I found in my van, I reset an anchor trolley. When I was done she punched him in the arm and said “I told you that didn’t work right.” Wherever you go- more happy Native owners…

All good things must come to an end…

On the morning of my last day, I got up to the sounds of angry lightning that shook the floor, got down to the car and drove off in a blinding rainstorm. I made my way to the rendezvous location and Rob was there setting up. He had a surprise: He brought his girlfriend Jeni. Jeni was dressed for the part and to me, seemed eager to get out there! It didn’t take me long to figure out why. Before either of us had even made a cast, Jeni was reeling in a fish. She caught her first shark. We had a great view of tall thunderstorms to the south and east but we had a great morning of weather with a flat calm start to the day. I do not think that Rob had much success, ironic because it was his home waters. But he also “gave” me the best location and I was throwing the Mirromullet XL and got fish interested in it. Big, fat, hard-fighting trout brought the Mirromullet XL to a halt when they hit it. Switching to a 12 Fathom mullet, I caught two flounder off a sand patch near an oyster bar. Switching back to the topwater, I was fishing alongside Jeni and I had a fish pound it in about four inches of water. It was a small redfish. 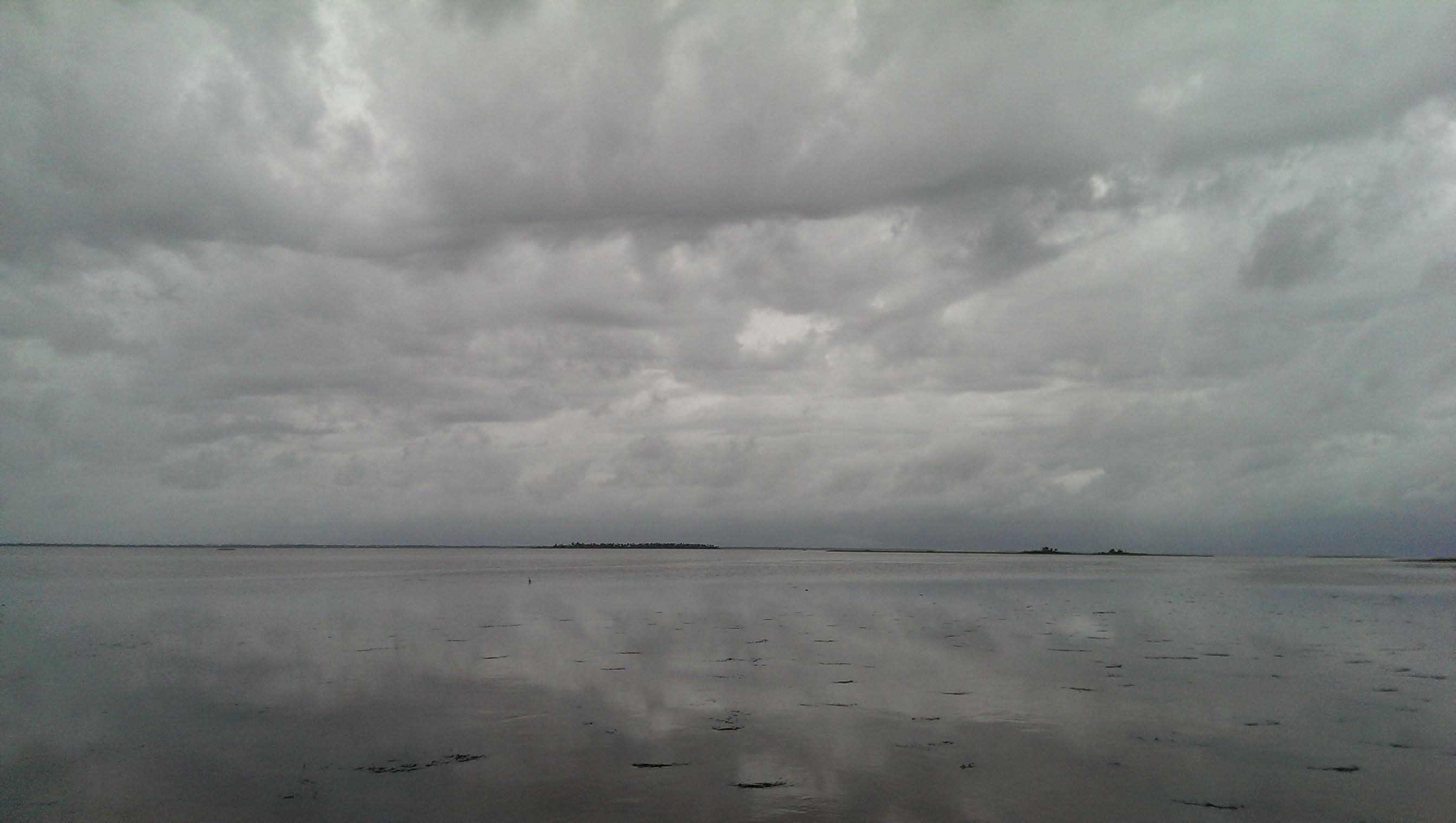 Finishing up, I was moving down a shoreline and saw an orange float in the water. As I approached I reached over to grab it but it submerged and disappeared. I stopped and made a few casts, scanning the water for the float to come back up. Twenty yards to my right it reappeared. One cast beyond the float and working my jig right across the float I managed to hook the leader. It was a 28 to 29-inch redfish. I think the most amazing thing about that morning was the large tarpon in the shallows. Roughly 80-pound fish: I am quite certain I have never seen them in a depth of about ten inches to a foot. Jeni asked “did you bring a tarpon outfit?” The answer was no but I also told her “I don’t want to hook one of those anyway. I’m on vacation.”

Sticking to the theme, we cut out after just a couple of hours fishing time, and I got in the van to make the rest of the drive home. Reflecting on the events of the week’s activities, I realized I got exactly what I wanted out of this trip. I got away. But not that far away. Those who know me best will see this and say “You’re still uni-dimensional.” I’ll argue it. There were days I did not touch a fishing rod. Well, there were two of them.

Images stuck in my mind: The Panhandle has a lot of shoreline that looks just like this. 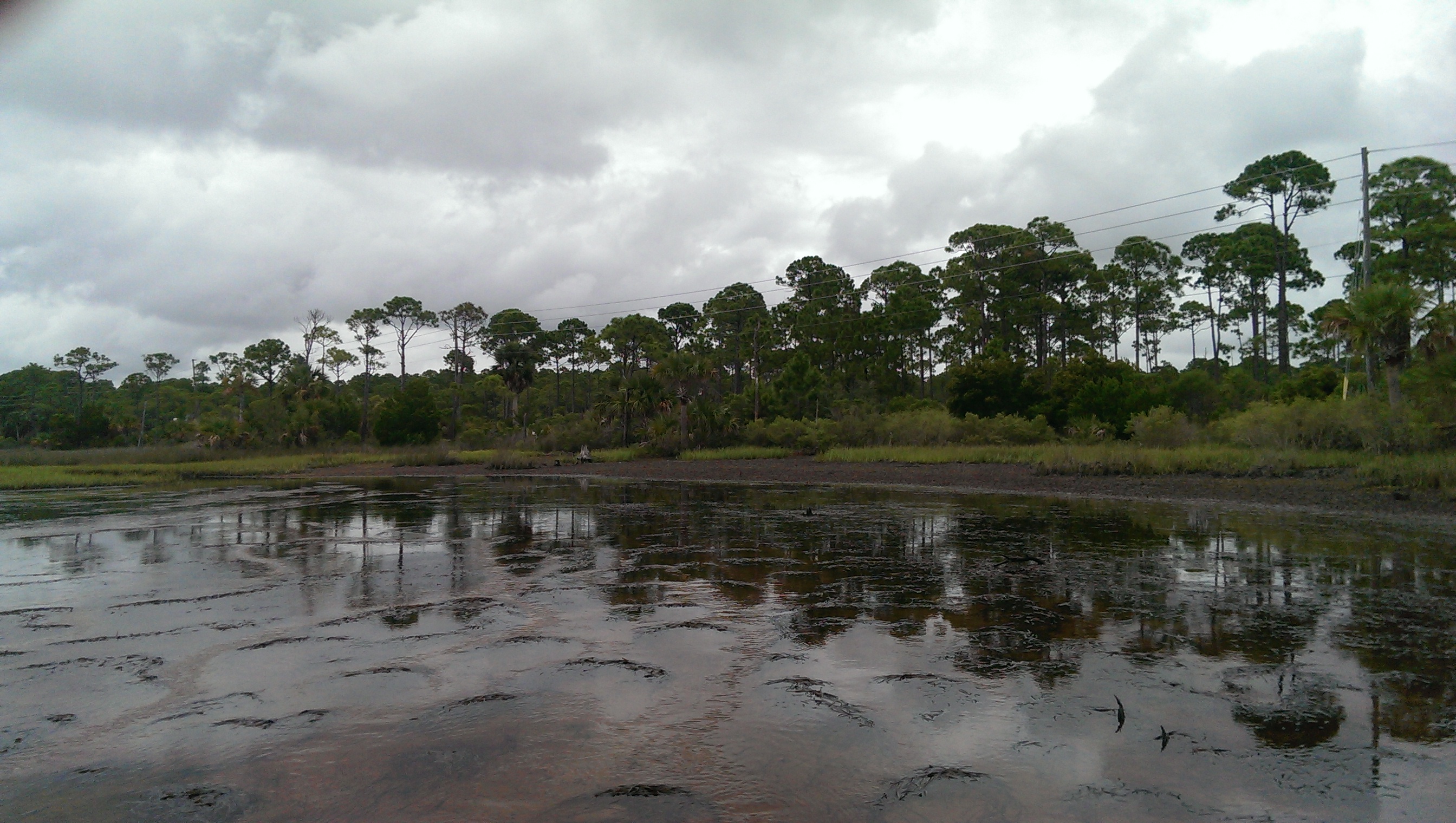