It’s been a long time tradition of ours to sneak out early Thanksgiving morning to do a little fishin’ and get back before the football games begin.  We’ve had some memorable trips.  More often than not, we’ve gone kingfishing.  It’s the right time of year and the water temperature is often in the range they like.  Near shore trips to the Blinds Pass “drop” or Clearwater hard bottom in only 20 feet can make for quick and easy outings.  Over the years, we’ve had to play the hand the weather deals us.  If conditions aren’t favorable for kingfishing the beach, we’ve had to redirect our focus. Fishing the relatively protected waters of Tampa Bay can be a productive option.  This too is when I like to gather some whitebait and pinfish, and mangrove snapper and grouper fish either the edge of the ships channel or any number of the reefs or rock formations in the bay.  (Who said you have to eat turkey or ham for Thanksgiving?).  There’s been a couple years when it got bitter cold and the water temperature plummeted.  We’ve ended up silver trout fishing just outside the swim buoys along Madeira and Redington beaches.  When you get em’ good, you can catch all you want two at a time on tandem rigged jigs.  They don’t get real big but what they lack in size they make up for in numbers.  They can be a blast to catch on light spinning tackle and there’s not a better way to teach kids how to cast and to make a fake bait look real.  Of the many things I have to be thankful for, these options are among them.  Surely has to beat shoveling snow. 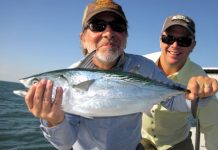 Flounder a pleasant surprise while fishing for gags