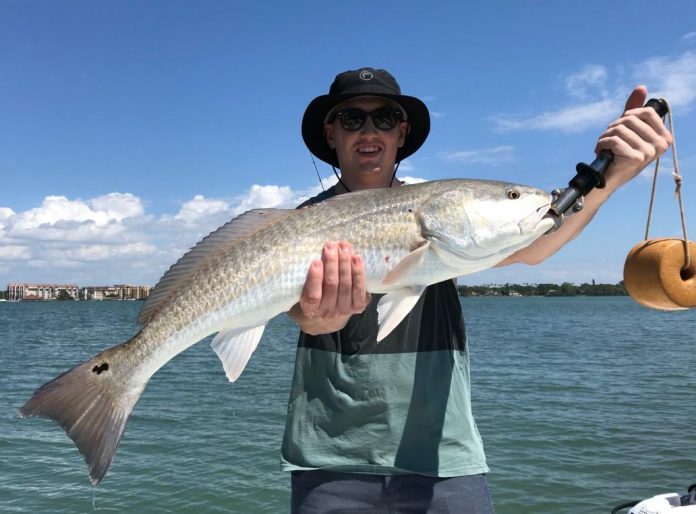 March finished strong with quality fish being caught for all three major species. Big trout were readily available for the last two weeks of March and seemed to be keyed into eating larger whitebait.  Baits that seemed almost too big were best.  Patience was required however as fish needed to be given time to turn these larger baits…typically three of four seconds…or fish would be lost. Fish should remain in the intercostal into April as long as water temps don’t go up too much.  Once they reach 75 and stay for a few days, the last of these larger trout will likely start to move out to the beaches.
Redfish were the biggest surprise of the month.  March is noted for having a high voume of smaller fish and although these fish were around, quite a few overslot fish were in the neighborhood as well.  The last six or seven trips have all yeilded overslot fish with many of these fish right at 30 inches…plus a few over. Small to medium pinfish seemd to be preferred most, but cut pinfish and ladyfish were readily accepted as well. With waters continuing to warm and tide heights improving, it’s likely that redfishing will keep getting better.
April is usually the month when snook start coming into their own, but with some early warmth in both February and March, some decent fish are already being landed. As water temperatures approached and passed 70 degrees, the snook would turn on.  When a minor cold front knocked temps back down into the mid to low sixties, the fish would become quiet again. Again, once the water warmed, activity would increase.  Large whitebaits were preferred but occassionally a large pinfish or grass grunt would hook a fish unwilling to eat a whitebait.  With temperatures stabilizing above 70 degrees in the near term, snook will be targeted on most trips going forward, with size and quantities of fish just getting better.  Good luck and good fishing.