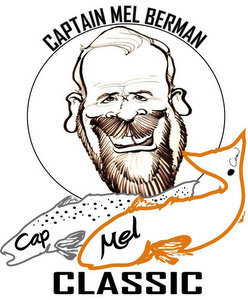 The morning tide had yet to turn, but that didn’t bother Neil Taylor.   “I just kind of like sitting here,” he said.   “When else do you get the water all to yourself?”    The Dunedin based fishing guide had invited me out for a little hook and paddle.   But Taylor had an ulterior motive.   In exchange for putting me on some monster trout, I’d listen to him talk about his pet project.    “This isn’t going to be your run-of-the-mill fishing tournament” he explained.    “This is going to be the first annual Captain Mel Classic.”    Mel Berman, whose golden voice entertained and educated thousands of anglers who tuned in each week to his Saturday morning radio show, died at 81 in February last year after more than 50 years in the broadcast industry.    Berman, who started his career as a Top-40-disc jockey, was an avid angler who loved to catch everything from redfish to gag grouper.

A local celebrity, Berman could fish with anybody in any kind of boat.    But once, 20 years ago, the talk-show host shared something that took me by surprise:  “To tell you the truth, my favorite way to fish is out of a canoe.”

In 1991, when I first fished with Berman, few people had even seen a sea kayak, let alone fished out of one.

But even then, Berman knew the advantage of human powered craft.

The canoe is great because it is quiet, no gas fumes, the fish never know you are there,” Berman would later explain.

When everybody else was flying around in $50,000 flats boats, Berman would spend his days off with his friend Merrill “Canoe Man” Chandler fishing out of an old 17-foot canoe.

Later that decade, when kayaks were becoming mainstream, Berman was among the first to embrace this style of fishing.

Taylor, the kayak guide, was one of the earliest proponents of paddle fishing, and so it is no surprise that the two men became friends.

“Mel was always great at inviting me on his show,” Taylor said.   “He really gave a voice to the kayak fishermen.”

In addition to his top-rated radio show, Berman also operated a popular website, Capmel.com, which provided a forum for anglers to talk about everything from fishing techniques to the latest in government regulations.

“When Mel died nobody knew what was going to happen to the website,” Taylor said.   “But it was a big part of so many peoples’ lives.”

Berman always worked hard to keep the discussions on his website civil.   Fishing forums are a great way to meet angling buddies, learn about tackle and tactics, and exchange views on the sport’s controversial subjects, such as catch-and-release.

Not everyone, however, respects the process.   Some, using screen names and protected by the cloak of anonymity, occasionally abuse the platform and peddle what some might call electronic graffiti.

“Somebody has to monitor the forums and make sure things don’t get out of hand,” Taylor said, “So when Mel’s family approached me and asked me to take over the website, I couldn’t say no.”

Taylor, a former professional baseball umpire, is a no-nonsense kind of guy.   So, the first thing he did as site administrator was draft a code of conduct that he strictly enforces.

“The troublemakers quickly found someplace else to go,” he said.   “Mel spent years building that website.   I had to maintain the integrity.”

It is not easy managing a website, running a full-time guide business and planning a fishing tournament.   Luckily, Taylor got a little help from Captain Mike Anderson, whose Reel Animals Saturday took over Berman’s 6 to 9 a.m. slot on 970 AM.

“We have got to make this one great since it is the first,” Taylor said.   “Mel did so much for the local fishing community.   The least we could do is have a tournament in his honor.”

As Taylor talked, he tossed his jig and caught trout after trout.

“Just slow it down and try to get a feel for it,” Taylor said.

He promised to reveal more tricks if I would convince people to fish the event in Berman’s honor Saturday.

Anglers can sign up online at Capmel.com or show up from 5 to 9 tonight at the Thirsty Marlin in Palm Harbor for the captains meeting.    The entry fee for the kayak division is $25.    The photo release “weigh in” starts at 2:30PM.

To reach Neil Taylor, visit www.strikethreekayakfishing.com or call him at 727-692-6345.

2019:   The Classic is in it’s ninth year.   Well attended, this “All lure, all amateur” event is a very popular format.      Entry fee for all divisions is $30, paid out to the winners with a certain portion going to the charity:  Suncoast Animal League.    The Captains Meeting and Award party will be at the Fat Cat Tavern for the 8th time.    (Five divisions:  Paddle, Open, Fly, Ladies and Junior) I still write for the Times, but I miss Terry being my contact man.    It just isn’t the same.

For all the information on the Ninth Annual Captain Mel Classic, visit

For my article on the passing of Terry Tomalin: