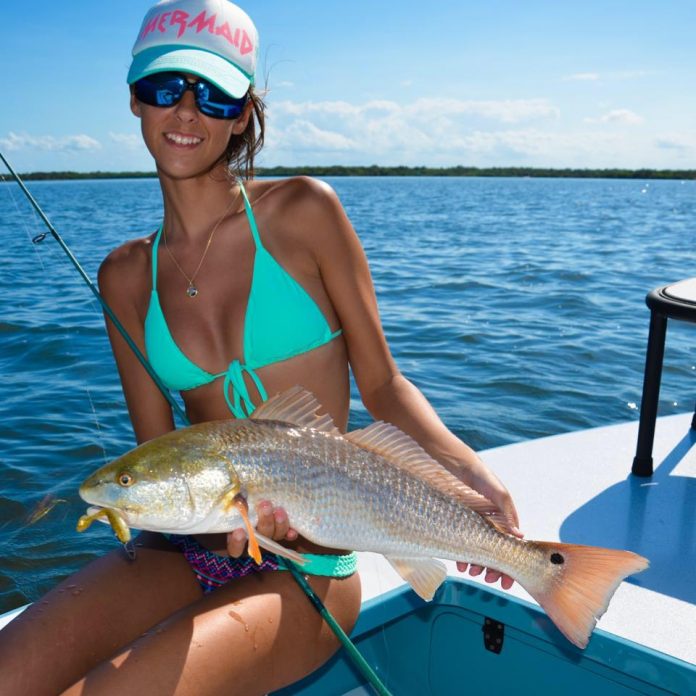 One species that “keeps you going back for more”

The Red Drum:   Sciaenops ocellatus.   A light tackle opponent in Florida inshore waters, reliably available most of the year- redfish become more than a choice in targeting for the angler, they become an addiction.

Of all the species to catch in Florida inshore waters, there is one fish that gets mentioned a great deal. Once an angler has experienced the raw power of the sciaenops ocellatus, they often make them a regular target from that point on. Their availability year-round in Florida waters, coupled with the exciting tug-of-war they provide, make them a passion for those who have the Redfish Experience. With some people, that’s all they want to catch, planning all their trips to intercept and catch these fish leading to “REDundancy” in their angling pursuits.

Redfish rules since the early 90’s have not changed, making the species the best management success in the history of Florida wildlife management. The “Blackened redfish” craze of the early 80’s led to extreme pressure on the redfish populations. Regulations on both recreational and commercial fishermen allowed this species to come back strong. Red drum are no longer commercially harvested in most states. A sustained species, redfish regulations have remained unchanged in the state of Florida for a long time. The typical redfish is 22 to 28 inches in coastal Gulf coast of Florida waters. One fish per angler per day is allowed for harvest and these fish must be “at least 18-inches and not over 27-inches.” Most knowledgeable anglers will not keep a redfish until it gets to be 22 or 23-inches in length.

Redfish feed predominantly on crustaceans and small baitfish. The juvenile redfish inhabit coastal waters the first four to six years of their life cycle. On the west coast of Florida, when they reach maturity, redfish will move offshore in large schools returning to the “pass” areas between August and October. Egg-bearing females will lay up to 2 million eggs in a season. Barring predation or harvest, redfish can live to be 60 years old. Bronze in color, a redfish’ most distinctive feature is a single solid black spot on the tail, likely a natural selection advantage over the ages, a feature which predators (primarily the porpoise or dolphin) may not be able to distinguish “head from tail.”

So many of the requests I get from people for really learning inshore fishing involves a specific request: “I want to learn how to find and catch redfish.” In most situations, the anglers have unsuccessfully attempted to catch this species. The reason that this is the case is often because of a few big factors:

1) Location. Redfish are usually shallower than the waters that people go fishing. Many times when I get these people out there, they will remark “The water sure is shallow.” People realize from that point on that they were “out of the game” by their location selection, never getting shallow enough to encounter the redfish where they are most likely to be found.

2) Stealth and approach. Too many anglers have no idea that the redfish can be one of the “spookiest” of fish, shutting down their feeding or evacuating an area altogether if the angler doesn’t take great care to eliminate noises and avoid moving right into a school of fish. The kayak is the very best way to approach redfish and keep them in their undisturbed state. Anglers who have power boats figure out quickly that using a pushpole is much better than pushing in to redfish using a trolling motor. Anchoring a kayak or boat can have a negative impact on the redfish feed. “Throwing an anchor” instead of quietly placing it in the water can alert the fish to the presence of a “predator.”

3) Technique. So many people want to utilize artificial lures to catch redfish. Without advanced technique in using lures, and knowing some of the other “tools and tricks”, redfish will not be easily caught throwing the lures to them. The ability to aggressively move a lure in shallow waters but still minimize the speed that it is traveling is paramount to success. In specific situations where the bottom characteristics have thick grasses or the surface has floating grasses, employing a “weedless jighead” will allow the angler to get strikes from fish because the lure doesn’t hang up in those grasses.

4) Timing. It’s not necessarily “where” you fish, but when you fish. There are variables for finding feeding redfish from area to area. With time on the water, the conscientious angler will determine patterns to when the fish are feeding based on the tides, the time of the day and the time of year. These patterns are largely duplicated for the same area and the same time of year. During the warmest months, with good tides, redfish are much more likely to be feeding if there is good movement to the tide. 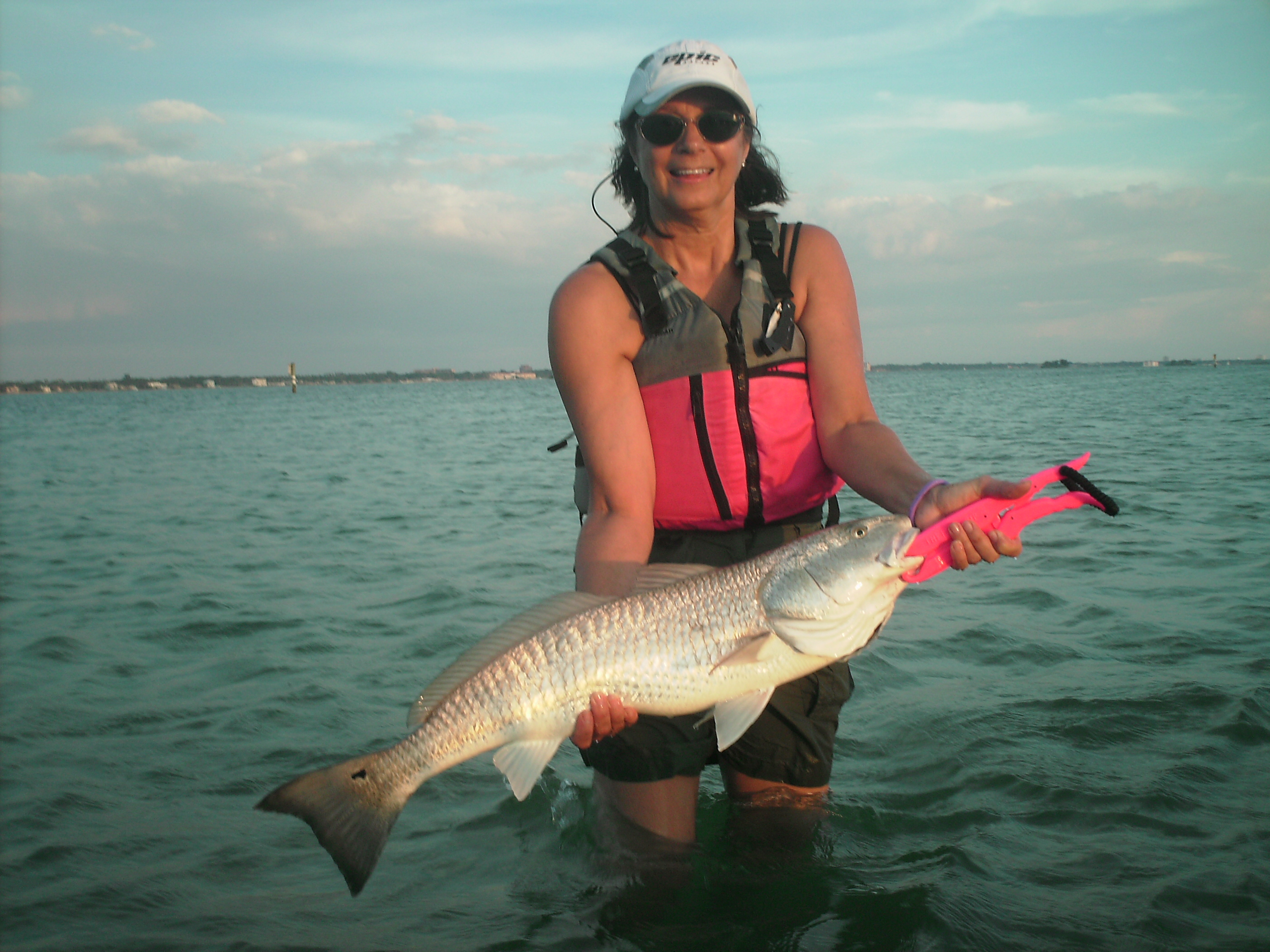 The mysterious thing about the redfish is their moody, fickle nature. All fish have a little bit of this in them, but redfish, normally gluttons can be sulky, uncooperative snobs some of the time. There will be times when the fish are ganged up in tremendous schools but are not actively feeding. In these situations there is little anyone can do but there are some things to try.

“The Back-up Plan”
For the purist, lure-thrower, when faced with the daunting task of getting sulking redfish to eat: A topwater lure may do the trick. Having faced this situation many times, I am convinced that a noisy topwater continuing to disturb the peace, redfish attack it not so much for a meal but to “kill it” so it won’t be bothering them any longer. Many people use topwater lures for redfish are their “go to” offering all the time. Knowing that it may be the key to success in those toughest times could prevent a “skunking” (catching no fish).

Natural baits, live or “fresh dead” will get taken quickly when placed in front of a redfish. Scented lures also fit into this category. For the sportsman, this is often the boring way to get into the action, but it works. From late May through mid-October, anglers who target redfish when the “sun is high in the sky” from the hours of 10AM to 6PM, the natural baits or scented lures kept down in contact with the bottom are going to be about the only way to get into the action. When the sun is less intense, using the lures can outperform the natural baits if the angler is decent with the presentation. It is quite simple really: Lure throwers cover more water. 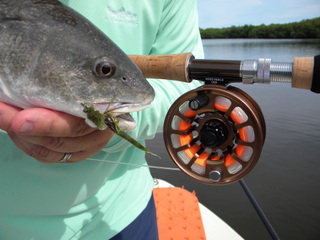 “Tailing redfish”.
Perhaps in a category all by itself, sight fishing redfish can be done in the extreme shallows. Tailing redfish are a regular occurrence but anglers need to find the specific locations where this happens. So many people telling me about “tailing redfish” are talking about mullet schools. When a redfish is “tailing” they are usually in water that is under ten-inches in depth. The physics behind their tail coming out of the water has to do with the fish digging their head down into the bottom to get a meal. The head down in the mud or grass, the tail rises and waves. The best areas to find redfish in this mode are usually areas of thick turtle grass. This is a thrilling way to target redfish but it can be frustrating as well. Using a soft plastic lure rigged weedless is tough to beat in this situation.

Hooked redfish put up a great fight. Medium spinning tackle is perfect for battling reds. The telltale signs that the fish bending the rod is in fact a redfish becomes obvious during the battle. The incredible amount of thrust of their tails is evident by the large boils in the water. Redfish have great energy and power but they aren’t too “tricky.” With hard mouths and no “webbing” areas like snook and trout have, it is a rarity to lose a hooked redfish if the angler is using sharp hooks and gets a good initial hookset. If the drag is set appropriately on a reel, redfish can pull out some line without reaching breaking strength.

For oversize fish or other fish that are not going to be kept, redfish have top
durability for catch-and-release. On occasions where the redfish have swallowed a lure or hook, leave the fish in the water and cut the leader as close as possible. Redfish will not only survive with hooks in their mouth, throat or gut: They will continue to feed. In 2007, a redfish was caught that had five pieces of line coming out if its mouth.

If it’s a desire, hire a guide to teach you the tricks to targeting redfish and join the legions of redfish addicts who love to tangle with these terrific sport fish.