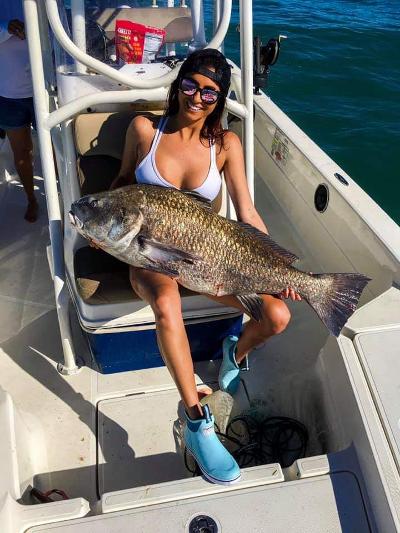 That drumming sound in the sea is fish on parade

For two months, big black drum gather in open water, noisily spawning and putting up a great fight if caught.

TIERRA VERDE – The call was unmistakable as the large black shapes swam around the boat.

“Do you hear that?” Doug Hemmer asked. “That’s why they call them drum.”

There are about a dozen members of the Sciaenidae family found in Florida waters, the two most common species being the redfish and spotted sea trout. Although these fish may vary in size, shape and color, they share a trait: the ability to twitch a muscle that covers their swim bladders and create a distinctive drumming noise.

During the spring months, inshore anglers often catch big “bull” reds that fall outside the legal slot limit. When hooked on light line, these monster redfish put up quite a fight, making them one of the most sought-after inshore game fish.

The red drum’s less glamorous cousin, the black drum, usually confines itself to piers and bridge pilings, except during February and March when the fish gather in large numbers and move through open water in a spawning ritual.

Hemmer, an artificial-lure enthusiast, was on his way back to the dock after a charter when he encountered a pod of 100 of the big, bronze fish.

With paying customers aboard, he couldn’t resist the opportunity to cast a plug at these brutes, which can easily reach 50 or 60 pounds.

“Hook into one of these bad boys on spinning rod with 12-pound test and you are in for a ride,” he said. “You don’t get a chance to fight these fish in open water that often, so when you do, you have to take advantage of it.”

Hemmer had been fishing for reds when a friend called on the cell phone to say he had located the school of black drum cruising along a channel near the mouth of Tampa Bay.

“You’ll find the big spawning congregations moving around during the months of February and March,” said Mike Murphy, a biologist with the Florida Fish and Wildlife Research Institute in St. Petersburg. “You’ll get so many black drum together in one spot you can actually hear them on top of the water.”

“All members of the Sciaenidae family have the ability to make the drumming noise,” said David Mann, an assistant professor at the University of South Florida’s College of Marine Sciences. “With most species, only the male makes the noise. But black drum are unique in that both the males and the females drum.”

While many native Floridians might recognize the Boon-bound! during the spawning season, those unfamiliar with the phenomenon can find it unnerving.

Last month, the southwest Florida city of Cape Coral agreed to pay Mann and a graduate assistant $5,000 to find the source of a mysterious noise that was aggravating residents living along local canals.

The city had considered hiring an engineering firm for $47,000 when Mann and Jim Locascio told them they could solve the mystery for a fraction of the cost.

“Most of the people who live down here come from somewhere else, so when they hear something they can’t identify it really starts to bother them,” Locascio said. “They have no institutionalized knowledge to fall back on. But if a Florida cracker hears the same noise, they can tell you right away what it is.”

A year ago, Locascio conducted a similar black drum study in nearby Punta Gorda.

“So we knew right away what it was,” he said.

“We know they call as part of the spawning process,” he said. “But since both sexes do it, it could be something more.”

One theory is that black drum are a highly advanced species and their calls may go beyond the mating ritual.

“Some researchers believe that it could be some highly evolved social dynamic,” Locascio said. “We just don’t know.”

Black drum can reach 80 years old, measure 4 feet long and weigh more than 100 pounds. They are primarily bottom feeders and eat a variety of mollusks, shrimp and crabs.

But on the warm March morning when Hemmer stumbled across the school, the fish were in a feeding mode that included finfish. With this in mind, Hemmer fired a hard-bodied plug normally used for trout into the mass of fish, and within minutes he was hooked up to a runaway freight train.

He handed the rod to one of his customers, Jennifer Cully, who took about 20 minutes to land the 60-pound fish. The fight would have taken twice as long on the lightweight redfish stick had the skipper not thrown the motor in gear and gave chase.

“I think that is one fish she will remember for the rest of her life,” Hemmer said after releasing the giant.