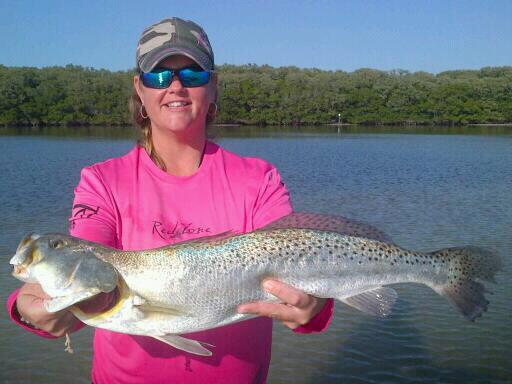 You won’t catch them all day long but if you work for it:  Nice fish are being caught right now.

Weather got ya down?  You are not the only one.   January has become a dreadful time of year, particularly the last four years.   The fishing to start the month was just plain “off.”   Even on the better tides, the fish were miserable.   We knew they were there but with cooling water, the metabolism of these fish has also slowed down.  They are eating less often and they are sulky.   That will not last forever.

Success lies in the decisions.  Maybe a change of venues?   Going for some nonstop action: Silver trout are a great January target.  Pick a location near a local Gulf pass and put down small jigs in depths of 9 to 15 feet.  Drift until you catch one then anchor the location because they school in good numbers.   Sometimes out on the beach troughs, many silver trout inhabit ship basins and boat channels.   Good fresh silver trout fillets are great dinners but don’t attempt to freeze them.  Unless you don’t mind eating mush when you thaw them.

It is the time for big trout.   It is every January.     Locate them in the shallows on the negative low tides.    Use topwater lures and the 12 Fathom lures for EASY success.   Trout to 25 inches are common right now.

Action:  Silver trout and whiting are an easy one.   Use the Silly Willy with an Uncle Neil teaser to connect.

Try the residential docks for sheepshead, redfish and black drum.   In fact, the only people who had success on certain days early this month were throwing fresh shrimp under docks. The shallows, if fish were there at all, were shut down.   Shrimp wins as an all-around bait for this kind of action.  If you are just after small drum and sheepshead, fiddler crabs are also a prime bait.   Shrimp: Shrimp will catch them all.   January is the only month of the year where you will hear me talking about “shrimp for bait.”  The absence of pinfish is the biggest reason why I would consider it.   The lockjaw fish will respond better to a bait than a lure when things are really bad.

Be ready to make those adjustments.   Another one that a bag of fresh dead shrimp will accommodate: Whiting.   In my first attempt on this species yesterday, David caught good numbers in some very murky water.   They are reliable and pretty good fun on light tackle.   One of the better eating species we have, when you intercept a school, you will have a lot of dinners fast.  Small mouths, use small hooks.   Use an ample piece of shrimp but whole shrimp is unnecessary.

The days are getting longer and as we hit an “upswing” in action, which will happen between now and February:  Trout fishing will be excellent through the end of spring.    “Low light conditions” are best.  Fish for trout half an hour after sunrise and several hours before sunset to intercept the maximum feed.   Work over the vast grassflats that are 4 to 10 feet deep and move your lures just above the bottom.   Midday action can be good in the dead of winter.

Drift until you locate a school.   Redfish action is going to get easier and easier.   We have good numbers of fish but their location has been changing.   Snook:  A vast part of Tampa Bay is so void of that species, they are not worth mentioning.   The state commission has thus far ignored a plea from the community to hold meetings to consider the changing of slot regulations to manage this species back to health.

For success, learn fish habits in your usual spots