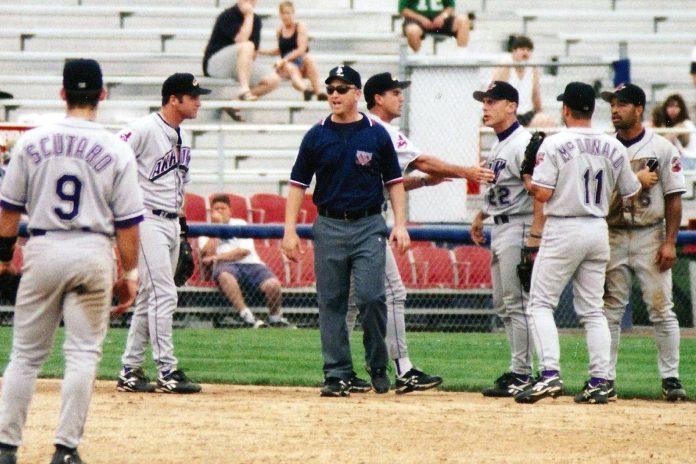 This one, the culmination of thousands of hours of work.    Taking my time to remember all the stories.    Selecting photos was easy.     Through editing only two other human beings saw this piece of work.     Therefore, I don’t have the feedback on this one I normally have.

My life as a baseball umpire.  My life in general, not so much.   This is primarily about the baseball years.

I will have someone else write the official review.   This is an informational article “that it exists.”    I realize that a lot of people are going to want this one”, a good thing.

A long list of the guys I worked with.    Short stories about the guys I knew the best.   I think they will relate to what I have shared.    It is about sharing.   This was my life.   It was big back then.     I got into some great things.   They were fun times.

A criticism of myself:  I didn’t jazz it up.    I kept my eye on the ball.   Just telling the story.   Not pumping it up any, just the story.     I could have used creative license and made this book a sensational story.   I didn’t.   It reads like we are sitting at the bar and I’m telling you about those years.

The first three books were good.   This one is in a class all by itself.

Book 3:  I Thought It Was Funny

Book 5:   Way down the road.   It too, will likely be one people will find interest.    I cannot divulge the subject matter.    That is part of the mystique.

I was loyal to the umpire thing.    You were with us or I didn’t want you around.    This gal came to Durham from Norfolk.    She came to a game and we were going out after the game.   We arrived to the bar and she was talking about these autographs she’d gotten from players.   I said “Let me see it.”   She pulls the ball out and hands it to me.    I proceed to throw the ball onto the roof of the restaurant.     She is just standing there stunned.   I said, “Brian was out there, why didn’t you get Brian’s autograph?”     Probably too much, but I usually made my point.   She learned a great deal right then.    Umpires, you’re either with us:  Or you’re “out.”

Late season highlight:  Jumping the fence at the ballpark in Durham with the Phoenix Suns gorilla, a highlight of my final trip into Durham.    About two AM, after the bars, me, Rob Daly and the gorilla jumped the fence and were in the old ballpark.   Same series, final game of the year:   Ninth inning.   The announcer comes on to say that Princess Diana was in an accident.    My biggest memory:  Going extra innings on the final day of the season.   In extra innings they announced she died.   That was the final game that Durham was in the Carolina League.    I’d see Durham again when I got to Triple A.

The final year, 2004, spring training was interesting.   I didn’t get a full schedule, kind of just a sign of where I’d been stuck most of my career.   But they gave me a handful of games.    The games I got put me in the spotlight over and over.    The two biggest situations:  The Blue Jays and Phillies throwing at each other.     I jinxed it.   In the lockerroom before the game I asked the two big league guys “How are these teams getting along.”    The answer was, no problems.    Then they started drilling each other.   I’ve got warnings out.    I’ve now ejected both pitchers and both managers.    Tosca was a manager in the IL the year before.   The other manager, Larry Bowa, kind of a head case if you ask me.

Also, the final year, in Columbus, home of the league office.   Both guys on my crew have had time off for injuries.    Randy Mobley comes in to the locker room after a game.   Asks the guys how they’re doing.   The guys give their stories about their struggles.   Randy turns to me and says “How are you doing?”   I said, “Fine.”   He said, “Holding your own?”   I said “Well, I’m not going to hold someone else’s.”

The Holidays, by George