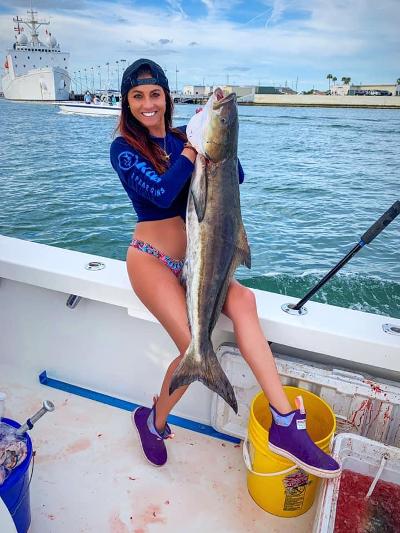 The first serious cold swept in impressively this past weekend, dropping inshore water temperatures into the low 60s almost overnight and quickly moving fish from their fall habitat into winter refuges. Cobia will be the prime target on Tampa Bay with the chill. Anglers have learned that the species gravitates to warm outflows from power plants as the water cools, and this makes them far easier to find than at any other time of year. The Big Bend TECO plant near Apollo Beach is an area favorite, often drawing dozens of boats to pursue schools of cobia mixed in with hundreds or perhaps thousands of rays, also drawn by the plume of warm water, which extends more than a half-mile into Hillsborough Bay before mixing with the colder surrounding water.

There are plenty of jumbos mixed in with the smaller cobes early in the season, and fish of more than 40 pounds have been reported in recent weeks. Cobia must be a minimum of 33 inches to the fork of the tail to be harvested. The standard technique for catching a cobia is to cruise the waters outside the outflow channel on calm days, looking for large eagle rays. Cobia have a strange fascination for rays, and glide along just under their wings for hours at a time, perhaps as a defense mechanism against sharks. The rays are easiest to spot with a high sun and no wind. Anglers with tower boats have an advantage at seeing into the water and locating them, and polarized glasses also help a lot. Cloudy days with lots of wind are not good days to try to find cobia in the power plants; you simply can’t see them. Cobia also show up cruising solo many times, and sometimes they even hang close on the flanks of the many manatees passing in and out of the hot water area. (The whole zone is no-wake because of the presence of the manatees, so boaters must operate slowly and keep a sharp eye any time they enter.) Cobia are not picky eaters when they’re not pressured; they’ll readily grab jigs, spoons, soft plastics and topwaters. But by far the favorite attractor is a black plastic eel, about 8 to 10 inches long, typically fished on a half- ounce jig head with a 2/0 or larger hook. For whatever reason, cobia seem to have a fatal attraction to these lures. The fishing tactic is simple.

When a fish is sighted, the eels are cast across the line of travel, then cranked back fast, just below the surface. If the fish has not been harassed by other anglers, it’s likely to come zipping after the lure and run it down. Unfortunately, within a week or so after the annual migration to the plants, most of the fish have seen plenty of lures, and they become much more difficult to fool. Large live shrimp, small blue crabs, pinfish or other baitfish then do a better job, though accurate casting with some of these baits is difficult because of their minimal weight. Most anglers use medium spinning gear, with rods 7 to 8 feet long and reels loaded with 12- to 17-pound test, to take on cobia. Though the fish are powerful, they’re not usually inclined to run for cover like grouper or snook, so the relatively light tackle can subdue very big fish as long as the drag is kept light. Handling cobia in a boat can be a challenge. Like dolphin, they tend to save a lot of their fight for the last. As soon as they’re pulled up on deck, they go berserk. For fish that are to be kept, this is less of a problem. They simply can be flopped into a big fish box and allowed to wear themselves out. For fish to be released, the best bet is often to leave them in the water and flip the hook out with a disgorger if possible. Fish brought into the boat beat themselves up, and large ones might break tackle and gear.

RED ALERT: The redfish bite continued at Charlotte Harbor until the cold front, according to captain Van Hubbard of Englewood, who reported two hours of steady triple-hookups on fish 27 to 31 inches long last Wednesday, and another big rally Friday. Hubbard went deer hunting during the weekend so he had no after-the-front report, but odds are the fish will still be around, perhaps off the edge of the flats rather than up in the shallows.

The honeymoon isn’t over