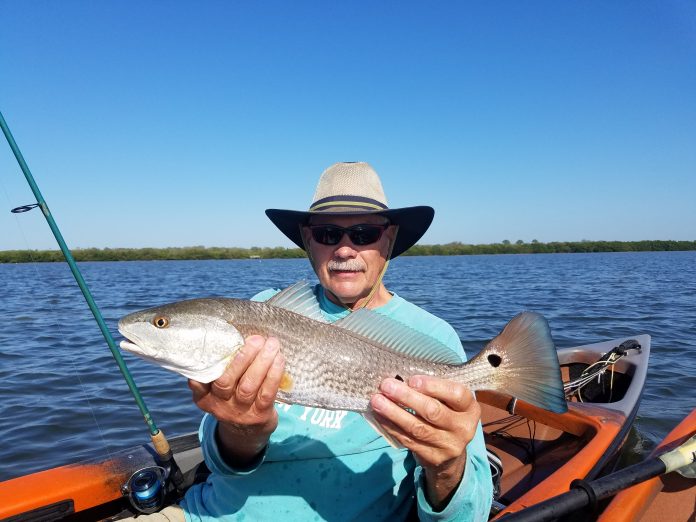 The month of the Captain Mel Classic:  Now in the books, the seventh annual event was another great success with many fun stories and a whole lot of great things for the community.   Charity money continues to grow from generous Classic winners asking to have their winnings go to Suncoast Animal League!    The setup for the Classic was the same as years past but with just more from all of the sponsors, new sponsor donations which just meant a little more time organizing the products for prizes and the huge raffle.

The transition to spring is complete. Stepping into the water over the weekend, it had that old familiar “warmth” to it long before the sun had even gotten very high in the sky. Recent fronts and high winds had kept things on hold as far as fish finishing their travels back out to their summertime haunts. Not anymore. Things are definitely in the warm weather pattern. Large glass minnows have arrived inshore and the scaled sardines will be found on the shallower grassflats in increasing numbers in the days to come.

Recent trips had a variety of results. Several of the windy days had tougher fishing, especially when expanding the options would have required lengthy paddling into that wind.

Other days had more typical spring conditions and better fishing.

The past few days have had very good fishing.

I moved trips around to a lot of locations around the region.   Action was average in some places and pretty good in others.  One particular location remains “off” overall but there are still a few good fish to be caught there too.   The arrival of baitfish on the flats is the missing ingredient to some of the best action of the year.   This could happen at any time now and will be a great time to build a lot of confidence in using lures to catch the species we have here, particularly redfish.

Redfish continue to be pretty good.   Although still out of normal patterns we have been intercepting some. The smaller ones have been available in various areas: Against the trees, in swashes and around the oyster bars. The larger ones have been more likely to be patrolling the foot and a half deep grassflats in search of a meal.

The 2017 Captain Mel Classic complete:  Here are the RESULTS

An email this morning:

It has been eight years since I caught a Snook. You have been telling me that it’s still not right. Well I wanted to tell you that I broke down and I came down to your area and I booked a guy to take me snook fishing. What a mistake. Do you know that we only caught one and it was about 15 inches. I have been following what you say about snook and my experience would confirm what you are saying. They did not make good decisions in the management of that species. I haven’t been coming down and eight years and my last trip with you I got 14 snook and the average size fish was 33 inches. It is a shame they didn’t listen to you and the others and try and rebuild that species back to what they were”

The very next day I got word that Jay Brewington died after his own struggle with cancer.   Jay and his good friend John started a kayak fishing website and internet forum.   Jay and I were acquaintances for years, mostly talking about baseball.   In the past year he became more of a friend as well and I am pleased that I got to spend a lot of time with Jay at a gathering where we talked at length about so many things.   As with my brother Mark, Jay was very intelligent, funny and enjoyed people.