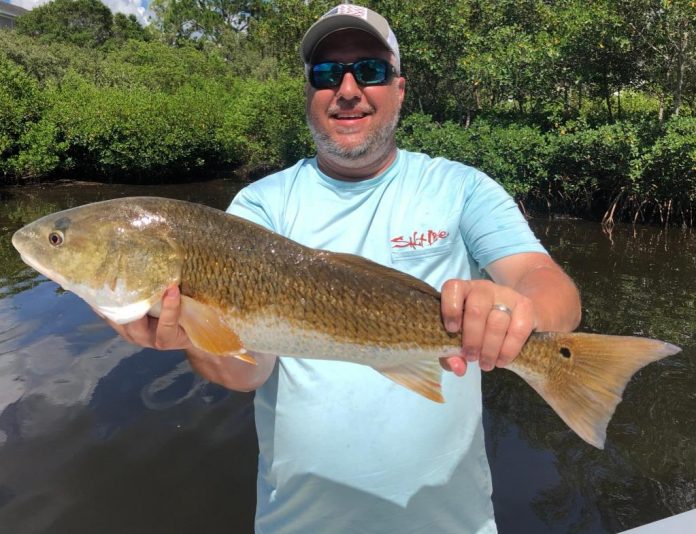 The crazy snook bite in Northern Pinellas County is starting to wind down.  Large fish are still being caught but not nearly in the numbers of a few weeks ago.  With that said, double digit snook days were happening right up until August…but smaller male fish were making up a larger percentage of the catches. Groups of snook can still be found but these fish are beginning to move.  A decent percentage of the largest fish may have pushed off shore a bit while other fish have moved inside the intercostal, taking up residence along spoil islands and some locations on mangrove shorelines.
Redfishing remained hit and miss with fish being caught everywhere from out on the beach over the sand to the backs of residential canals.  August can produce some excellent redfishing and some not so good days as well. The beauty of redfishing is that a decent group of fish could be found on any day.  The likelihood of this happening will improve as summer heads towards fall.  Cut baits, whitebait, pinfish and smaller grass grunts have all produced fish in the last month.
Tarpon sightings off the beach have become a fairly uncommon event although there are likely some fish still around.  Seatrout are small for the most part with an occasional quality fish coming from both beach and inshore locations. Good luck and good fishing.