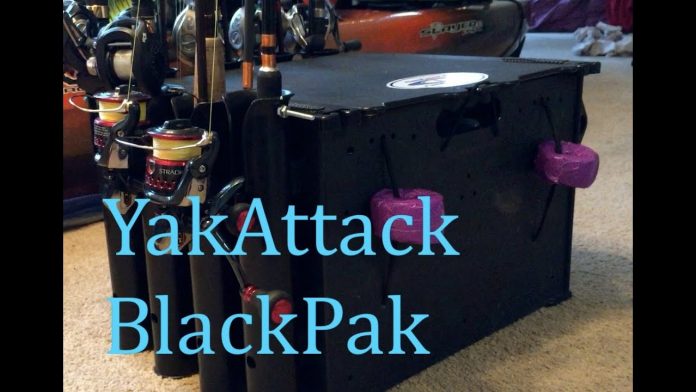 Transitions always happen in life.   For me, replacing a crate system I used for fifteen years.   The replacement:  The Black Pak, by Yak Attack.    Luther, I have known for years.    He has been a supporter of the Captain Mel Classic.   Luther has become known as an innovator.    I have watched him put together great gear options for the kayak anglers.     He has also transitioned into the kayak business as well.     This:   On his best accessory.

It is quite simple:  You have options for anything you can use for your fishing expeditions.    If you want the best, get the Black Pak.    It looks better.   It is strong.    It is just a superior option to others, especially the do-it-yourself kind of things.

I would suggest getting a Black Pak.    This will be a great organizer and has built in rod storage with three rod holders included in the pack.   For me, it will be for tackle storage just like my old crate was.     Boxes of lures, leader line, pliers and all the other accessories I may need while out on the water.   Keep it in the Black Pak, it is always there for me to use.     The crate goes in my kayak, I have everything I need.   Sunscreen, bug repellent, tackle, flashlights.    You name it, it’s in my Black Pak.

Durability:  Exceptional.   Performance:  It is a crate that will do everything you want it to.    You can decorate it easily with decals if you want to.

Putting it together, the final product is exciting.   It is the best crate I have ever had.     My suggestion, put all the pieces out on a table.   Take your time and familiarize yourself with the components.  Then, read the instructions.    It takes a little while but the end result is very pleasing.    Screws attach to make sure none of the pieces will ever come off.   I would make one more suggestion:   Have someone help you.    Having a second person hold onto things while you snap things in place makes it easier.

There are great holes designed into the Black Pak for utilization.     My suggestion:    Look for Mike Ortego’s “Tackle Webs” and get some.    The Tackle Webs install nicely on the crate for more “outside storage”.     The one I attached has two fly boxes in it.     Saves some room inside the crate.   Before it is all over there will be tackle webs on three sides and probably one also on the lid.     None of these will interfere with the handles.    On handles:   Pretty easy to add extensions if you want handles that go over the top lid.

I envision using the extra small holes to attach spools of leader line to the outside of the Pak.   The pliers holder is already attached to the outside.    Scissors will be attached the same way.    I used cable ties to attach the sheaths to the Black Pak.    Positioning is great and they aren’t going anywhere.

Where will your Black Pak go?    Most areas for a crate are confined.     If you are going to put it in a more open area consider putting something on the bottom that will grip the surface of your kayak and the Pak won’t slide out of position.     This is also an option if you want your Black Pak to sit higher.    Attach whatever thickness of styrofoam you want to the bottom to raise the Pak higher.    For some kayaks this will get your reels higher up away from the water.

If you want the best:  Get the Black Pak.    What more can be said about it?   Look at the photos, come look at mine and decide for yourself.   You need to have one.

Neil Taylor is the owner of Strike Three Kayak Fishing. He is the owner of Capmel.com. Outdoor writer, speaker and conservationist: Neil is all about fishing. By kayak, the only way he does it.