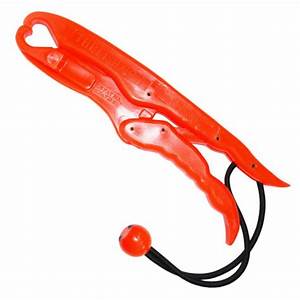 For some of you, this may be completely new.

Many of you will already know what this is and you may have already owned this item for a long time because your first “Grip” is still working just fine.    For others, they are going to go out and buy several to use themselves and keep an extra for when they take a friend along fishing.  This is a tool that resembles pliers and can be opened and then clamped shut in a fish’ mouth, keeping the anglers’ fingers safely away from the teeth of the fish and enables the angler to control the fish, remove the hook, and to revive a fish in the water.   The device is extremely useful for holding a fish for a photo.  It is a tool that helps reduce the chances of harm to both the angler and fish that are going to be released.

The Fish Grip is a tool that is also inexpensive and built to be light, visible and floats- just in case you drop it.  It is also equipped with a wrist lanyard to keep you connected to the

Grip.   They are durable, dependable and easy to locate because they are offered in bright colors.  Corrosion?   There are zero parts that are affected by the harshness of saltwater with 100% of the materials plastic and stainless steel.

In action, the grip locks in and stays put once the handle is compressed and it is not going to move.   Once the fish has cooperated by opening its mouth to get the Grip inserted, a squeeze of the hand and the fish is safely locked to the device.  For the release, the Grip handle is reversed and the jaws open to release the grip on the fish’ mouth.  “Grip to lock, flip to open” it works every time!

Where did Fish Grip begin?
According to Tucker Hoge at The Fish Grip:  “Mr. Don Norton, is the man who invented the product.  He was an avid redfish angler, and was trying to find a way to hold the fish better so he could control them.  He got the idea of making a tool that locks like a vice grip by putting rubber ends on a vice grip and trying it.”  That is where it all started.

“We have been developing this product for 12 years to make it what it is today” says Hoge, who works with the company with his father Cam.   The development of the Grip can be seen with the early prototypes.   Take a look at the evolution of the design:

The end result: A very inexpensive fishing tool that everyone should have with them.  A strong presence in the fishing world, many of the photos you have possibly already seen of The Fish Grip are professional guide photos of their clients holding fish.  If you don’t have one, they are fairly easy to find because retail outlets saw the value in this piece of equipment.

Retail pricing what it is, if you have fishing buddies that you need to buy a gift, this is something they will appreciate for years.   For each one you buy, you are spending under twenty dollars.

The Fish Grip is a sponsor of the annual Captain Mel Trout and Redfish Classic, with the next event on March 10, 2012

The product review was written by Neil Taylor, owner and guide at
www.strikethreekayakfishing.com
(Cell) 727-692-6345
LivelyBaits@aol.com