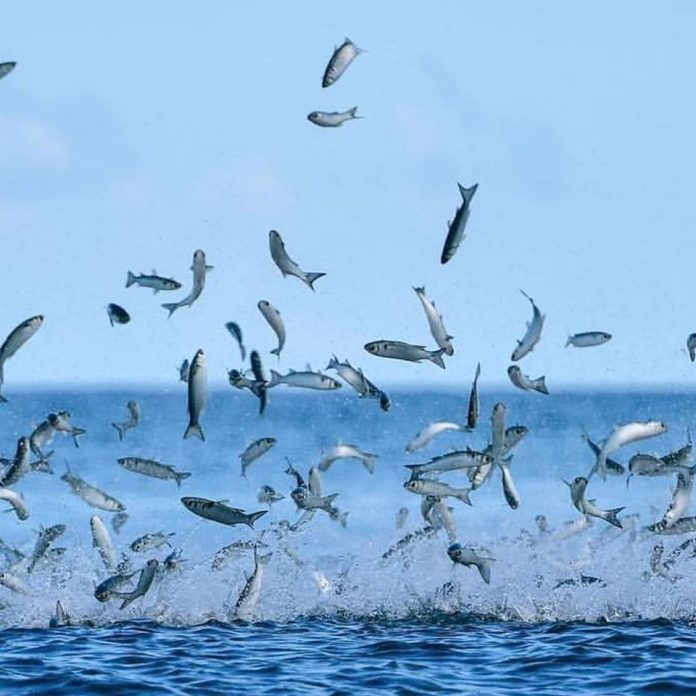 Full tilt “Fall” around the state.   October brings a relief from the heat and opportunities galore!   I have long believed that October is the best month for a lot of various opportunities.   Similar to the spring, the fish of  Fall are beefing up for winter.   Migratory activity is usually big in the tenth month of the year.    King mackerel, cobia and other species that change locations from summer to winter will be on the move.

2019 has not been great in some areas.  It has been acceptable in others.   Human pressures?  Other factors?    Anyone’s argument.    Assistance from the state:   It hasn’t happened.     Neil, 50 emails to the new govnernor:  Zero replies that were adequate.   Not good.     October possibly brings a jumpstart to fishing.    The first cold fronts could bring things around.   The ecosystem/resource is tough:   It can come back but more and more it looks like that can only happen if we start to help.

Seasonable opportunities:   King mackerel.   October and April are often the best two months to catch them.    Deep water, high current situations, if you don’t have the right boat:  Don’t do these trips.   If you haven’t learned deep-water-reentry, don’t do this trip.

Elsewhere, people are upbeat.   After another LONG, HOT summer- everyone is ready for this change.    For people in NE FL and the Panhandle, it is starting to change.   For us, central Florida on south, it may be a few more weeks but it’s coming.

Excitement always is the overwhelming feeling with the arrival of October.  The schedule, always lighter in September, begins to fill up.  The fishing:  The fishing gets easy!    Before the fronts of winter, pompano will be available again.   Speckled trout action will get better with the cooling of the water.   Redfish action just isn’t there for the most part.   Flounder didn’t really get going good either.  Some caught, it has been three years since flounder action was really good around here.

The weather should be decent, as most Octobers go, with the water and air temperature leveled out where the winds should hopefully be light and if we are lucky-no tropical weather or early cold fronts.  The action will be better into the midday hours than the summertime months.

Silver trout and whiting made an EARLY appearance.   That will get way better with the first cold fronts.   I jig them.   Using the pompano jig and teaser, if you are into them, it can be easy to get a bunch of them.    They are species I harvest and turn into fish spread.   No one else fishes for them so I don’t have any guilt about keeping them.    I will never keep a redfish or a snook again, ever.

Closed for harvest:  Nearly everything, until May of next year.     Pompano, flounder and snapper are most of what people will take home.    But, fronts, silver trout and whiting will become an option as well.

In the Southwest “Suncoast” area of Florida, Steve Gibson with Southern Drawl Kayak Fishing:
October is the best month in Florida as far as fishing and
weather go. We anticipate improved action on spotted seatrout, redfish, snook,
jack crevalle, flounder, bluefish, Spanish mackerel and pompano on the flats
and deep grass of Sarasota Bay.


The East coast of Florida, What will October bring?   Always interesting.    It is usually pretty good and should stay good for five months.    It varies year to year.    Where to go?    Mosquito Lagoon?  The Indian River?    The Treasure Coast?   They all have opportunities.    The answer is “yes.”    Hit is right and not only can it be a lot of fish caught, they could be big.     Black drum.   Redfish.   Trout.   Flounder (passes mostly).    Offshore opportunities as well.   October usually means some king mackerel moving by.

In the Big Bend of Florida’s Panhandle, Robert Baker at TnT Hideaway on the Wakulla River:  http://www.tnthideaway.com/ .   If you are going to be in Panama City, stop in and see Brad and his staff at Sunjammers:  http://sunjammers.com/   TNT and Sunjammers are reporting great action throughout the region for trout, redfish and flounder.   Kingfish, cobia are still great targets even though their migration out of our waters is nearing.       Robert offers guided kayak charters.    Brad has a fantastic kayak fishing shop in Panama City that you need to stop in and see.

In Northeast Florida: A fantastic time of year, get wet in October and use your kayak to catch some great fish.   We have great opportunities for redfish and flounder, some speckled trout and a variety of other species.    The nights will get considerably cooler, something that will make the fishing even better than it has been.      It should be a great month of fishing around the greater Jax area!   By month’s end, it will be time to break out the jackets again!

The Everglades, Flamingo anglers continue to report some action.    Tarpon lead the way and should continue to increase as October wears on.

Over to the Palm Beach area, greater opportunities exist for the extreme trips.   This is deep water stuff with big fish, something that is not for everyone.  One local angler learned the hard way what a leaky kayak can do.   He was rescued five miles out, only by the good graces of a passing power boat.

The tip of the month:
Storage of your gear.  Are you ready for a rollover?   The securing of “items that sink” will prevent expensive replacement costs should your kayak overturn.   There are many items that will float but bungees or other ways of tying off gear to the craft will eliminate that panic feeling if you are in this situation.   Do you use a crate?    Is it locked into the kayak or just laying there?   If it has a closed lid like the fishing buddy, if it is secured to the kayak, all the contents should remain in the crate during a rollover.  You think it won’t happen and the way kayaks are now, it should be unusual, but it may not be a bad thing to think about.

Need help learning how to kayak fish?   Hire one of our guides on staff for your region and take advantage of their knowledge and sharpen your own skills!   Steve covers the Sarasota/Bradenton area, Dee covers the Space Coast regions and Neil works the Tampa Bay area!    Three guides who are all on the Native Watercraft pro staff for your kayak fishing needs!

The idea surfaced and I decided to move forward with it. The Captain Mel Classic will remain in the spring. There will be a second one in the Fall every year. This year, it will be in winter. Moving forward it will be in October or November. A date for the first one will be announced soon.

The format: A trout tournament. Bonus species: Redfish. $3o registration. $10 for redfish. Payouts, farther out because there is no “combined inches” payout like in the Classic. Details on that will be announced after it is discussed in Committee.

“Terrific Trout Tampa Bay”A new event.    It will be in the Fall in the future but the first one will be this winter.    Low cost, buy in:  No charity, total payout.     Trout the main target makes payouts higher.    A buy in for longest redfish, the bonus species.

The Classic format is popular.    This one will be a little different.    Trout, our most reliable species:   “Longest” fish will win the cash payouts.    That will go down to many winners with the last winners getting prizes from my sponsors.     No charity, higher payouts.    One species, higher payouts.     Length is the decider in a photo-release contest.

Your input requested.    For the Classic, five divisions.  For this one, four.    Dropping Junior.   The kids can select one of the other four and compete.    Keep Open?   Keep No Motor?   Keep Ladies?   Keep Fly?    Have no divisions and it is everyone against everyone?     Please let me know your thoughts.

Participation will be good.    I figure:   A Fall date every year spreads the two out good for me.    This year, the Fall upon us, I figured a wintertime date gives me more time to promote it.
Thanks for everything and let me know if you are interested in being involved.Buy in will be $30, same as the Classic.   Buy in for Redfish, $10.    No charity, payouts will go farther.    No combined species, payouts will go farther.
Sponsor donations will dictate what happens.   I might use them all for prizes to winners.   If I get what I get for the Classic, I’ll probably have the raffle.   I have told the sponsors they are not expected to donate.  So, I anticipate some will, some won’t.      I’d just assign donations to winners.   Cash paid out first, then prizes for smaller fish caught.   Again:  I am just talking my thoughts.   I haven’t discussed it all in committee yet.
Note:    The site for this one will be different.   Nelson’s Sports Bar in Clearwater.     I will keep the Captain Mel Classic at the Fat Cat Tavern.    Having this one at Nelson’s puts it 400 yards from my house.   On 590 at US 19.    Southeast corner.