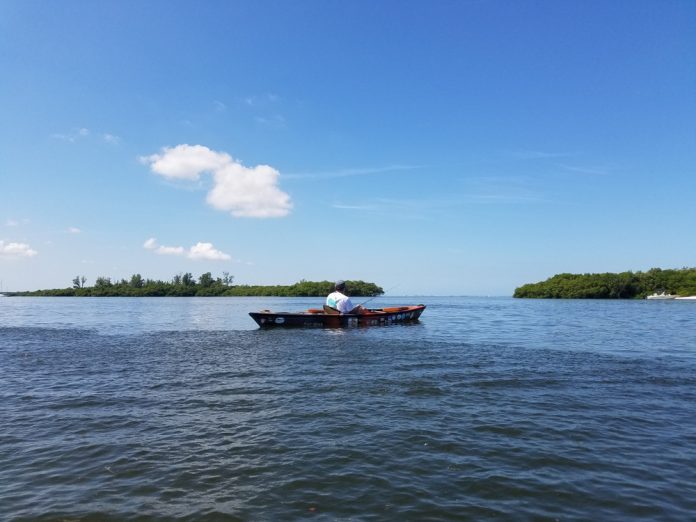 It was a weird ten days of ups-and-downs. Magically wild feeding days one day, the next day in the same situations things were tough. The inshore situation is very promising. The weather continues to hold out for a mild start to the month of November. Bait schools are still massive inshore and are attracting seriously large schools of pelagic predators. This next front may change that a great deal.

Redfish action has been consistent for a month.   They have been schooled up.    If you find the school, you’re in.  If you don’t, you’re shifting to something else.   When they are in packs instead of the larger schools it is easier to intercept redfish.

Redfish like the areas with a lot of oysters in these “backcountry” areas.    The reds, as mentioned, liked the bottleneck areas where the currents were running swiftly and plenty of oyster-bottom.

A glut of fat trout were attacking lures in the deeper troughs.   It has been pretty easy.

As November wears on, any days where the winds are forecast 10-15 or higher, the choice will continue to be the backcountry.  I’ll look forward to the winds laying down and getting back to some of the coastal areas as soon as possible, but the “backup plan” can become the primary fishing grounds a lot of the next four to five months.

No more “skool” in 2016:  Kayak Fishing Skool will continue in 2017.   The new set of topics is posted to the Seminars and Events section of my site.   The store:   Sells nearly everything I use on my charters.   The people:   Invaluable to you making the best decisions when shopping for outdoors equipment.

The trout action we complained about being so slow, well that is right on schedule anyway.   It is time and we have seen the first evidence on an increase in activity with big trout, something that once it starts it will continue for five straight months.    Throwing topwater lures one day this week, four trout over 20 inches.    The SlamR is one of my favorite choices but the bulky topwater is a great way to excite big trout (Mirrolure Top Pup or Top Dog Jr, tough to beat)

Pompano?   They are in the passes.    Bridge action done for the year, they are in the Gulf passes (except Hurricane Pass, thanks to failed sand projects and “dredging” there haven’t been any fishing opportunities at that location).    The Silly Willy with a pink Uncle Neil Custom Teaser is the best extraction tool.

Big jacks inside Tampa Bay and hordes of obnoxious bluefish “to the outside” have provided some extra action.     King mackerel and Spanish mackerel are still an option but may be thinning out if we get stacking cold fronts.

Call to book a trip if you want to get in on the fun.