In spite of the craziness caused by COVID-19 I was able to get out and fish this week. A wonderful thing about fishing as practiced by me- you’re not likely to run across any virus-carrying humans.

The equinox was this week- celebrate a little!

I had intended to run the Mosquito Lagoon Show and Tell Seminar on March 28. Given that I’m in a high-risk demographic in the event I’d contract the virus, I have decided to cancel this event. Maybe in the fall…

Saturday I launched the Bang-O-Craft at River Breeze Park, intending to do some scouting for an upcoming charter (since cancelled). Every time I do something like this I’m reminded of why I avoid fishing on weekends. I had to park most of the way back to Burch Road, the lot was full to overflowing.

My plan was to scout north of the park. I went up to the Blue Hole and started working my way back. In five hours I saw a half-dozen redfish and had one bite from a decent trout. In some of my formerly favorite places the water was almost opaque or the bottom looked diseased. It was not a great outing. I won’t be visiting that area for a while.

Monday Susan joined me for some more Mosquito Lagoon scouting. I launched the Mitzi in the wind and mist at Beacon 42.

Got two of these on a DOA Shrimp. Photo by Susan Surprise.

In the first spot we got two slot redfish, a bunch of dinker trout, and hooked and lost a nice trout.

Susan with a nice trout, released right after the shutter clicked.

In the second we got a nice trout, a flounder, and a few dinker trout. I wanted more spots but Sue was done, so we loaded up and drove home.

Monday night the trip I was scouting for was cancelled.

Tuesday I was on the way to do some Indian River Lagoon kayak fishing when I passed a breakdown. There was a child standing there and dad was lying under the truck. I stopped. “You under control?” “I don’t know where the jack is.” He had a gheenoe on a trailer. The trailer tire was shredded.

I was like a knight in shining armour. Because I have trailers, I have tools. I had him back on the road in 20 minutes.

I launched the kayak a few minutes later. The water looked OK, but there were no minnows, no mullet, no birds. I thought, “If I get a fish it will be a miracle.”

I paddled to the end of the spot, stood up, and began looking as I started back.

I saw three fish. I put the kayak in shallow water, staked it out, and waded back to the area, peppering it with casts. Just before I was to give up a fish struck. It was a lovely trout, about 20 inches.

I did not see another fish, nor was another bite forthcoming. The weather was spectacular though, and I had a great time.

Thursday Susan joined me. We went to CS Lee Park and launched the Bang-O-Craft. At the mouth of the Econ I had a solid strike on a 1” Sassy Shad. To my surprise it was a large tilapia. I was about to call my Aunt Rochelle when the hook pulled out. One does not get many tilapia bites.

I did get a pair of stumpknockers there, though. No thoughts of keeping them!

The mighty mudfish gets no respect. Photo by Susan Surprise.

We went up the Econ a way and I stopped to cast. I had another solid strike and a fish came cartwheeling out of the water. It turned out to be a bowfin, mudfish here in Florida. Got a crappie there, too. We went further up the very low river, dragging bottom in places and hitting lumber in others. It was very dead up there except for the gar.

This little guy followed the Chug Bug right to the boat. Photo by Susan Surprise.

I tied on a small Chug Bug and worked it for a while. Got a bite (it surprised me) and caught a seven-inch bass, the final fish of the day.

Friday sister Cheryl and I went kayaking in the Indian River Lagoon looking for birds. I brought a fishing rod but never picked it up- did not see a fish other than some mullet. We did see some eagles, spoonbills, coots, ducks, etc. etc. Nice paddle on a nice day.

And that’s my central Florida fishing report for this week. Thanks for reading it!

“Fishing is not an escape from life, but often a deeper immersion into it.” -Harry Middleton 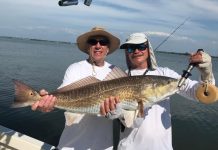