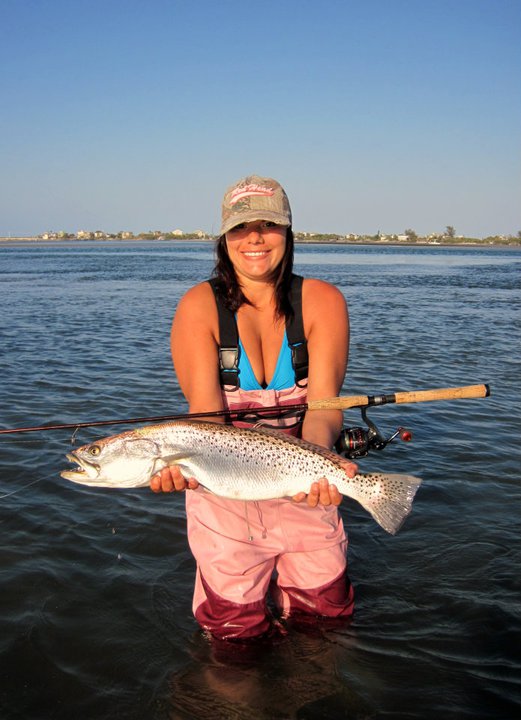 An interesting and busy week, with some very good fishing. So it’s the hot again Mosquito Lagoon fishing report.

Monday was a late half day with Daniel and his father (maybe Pete?), on Mosquito Lagoon. Anyway, it was blowing hard, around 20, out of the SSE. Realistically all we could do was soak bait on lee shorelines. It was not fabulous. We got a bunch of catfish including two catfish doubles, and got two stingrays, but also managed two nice redfish, and had some interesting conversation. Certainly not great, but we have all had worse days. Daniel and his redfish, which had a big scar.

Tuesday was a morning half day with Jeff Limato and Pastor Ed Hlad, Jersey boys both. Fishing Mosquito Lagoon we tossed DOA CAL shad and Riptide Sardines and did some damage on seatrout that averaged three pounds or so, very solid fish and fishing. And they got four slot reds, too. Most of this was blind casting, as it was quite cloudy most of the morning. All the fish were released. Jeff got this red and several other fish too. The magic lure of late has been soft plastic minnows like this Riptide Sardine in a variety of colors.

Wednesday Rick Callahan and I paddled the Econlockhatchee. I knew we would see a load of fish because we did not bring tackle. And the water was low and clear, so of course we did see a lot of fish. Species we observed included:
-American shad
-bluegills
-chain pickerel
-channel catfish
-largemouth bass
-mullet
-redbreasted sunfish
-spotted gar
-spotted sunfish
-tilapia
-various minnows, guppies, chubs, etc We also observed quite a few turtles, and some very large alligators. It was an awesome paddle that I need to do again with a fishing rod. Just a reminder that Godzilla lives at the Econ. Ray was deadly on trout like this, with a DOA CAL shad this time.

Thursday Ray joined me, back on Mosquito Lagoon. Again we tossed DOA CAL shad and Riptide Sardines and again did some damage on seatrout that averaged three pounds or so. There were quite a few reds around, schooled up, tailing, and most important, EATING. I thought it was the old days! We did really well all day, fishing just a short stretch of shoreline the entire time. It was really productive, just great. All the fish were released. He waren’t too shabby on the reds, either.

Friday found me doing a double half day. The morning trip was with Joe Bonato and his wife Sonia. Fishing a number of spots and using both cut mullet and the shad tails we got four redfish and two trout, not bad at all (I thought) considering how crowded the water was. There were boats everywhere. Sonia, with a redfish and a dazzling smile! The lady got some trout, too!

The afternoon trip was with Lee Nguyen and Angel Mercado, from South Carolina. The wind had come up pretty hard out of the west-northwest. I brought them back to the hot spot from the previous day, tossing the same lures- NOT HOT! Lee got one redfish where the day before we had caught and released at least 20 fish. I got in a lee and soaked mullet chunks long enough to get two catfish, quickly ending that little experiment. Lee and Angel were very happy with their redfish.

We went to a spot I hadn’t fished in a long time, and to my surprise and delight there were some fish there. We got three or four reds and a couple of nice trout using the shad tails, not as good as I would have liked but certainly better than nothing. All the fish were released.

Saturday I got to run last week’s postponed On-the-Water Show and Tell seminar. It gave me the chance to run most of the way around the southern basin of the Mosquito Lagoon, down the west shoreline from Haulover to behind Pelican Island, around the Whale Tail, back up the eastern side to the north entrance to the pole-troll area, and finally back down the ICW to Haulover.

The water is clean everywhere.

A shocking amount of seagrass is gone.

If we get another algae bloom this summer (and this reporter feels it’s inevitable) I fear that will be it for the remaining seagrass. My estimate is that 2/3rds of it has already been lost- better than the Banana River Lagoon, better than the Indian River Lagoon, but still tragic. The seagrass directly drives the productivity of those waters. Stay tuned for future developments…

That is the hot again Mosquito Lagoon fishing report!