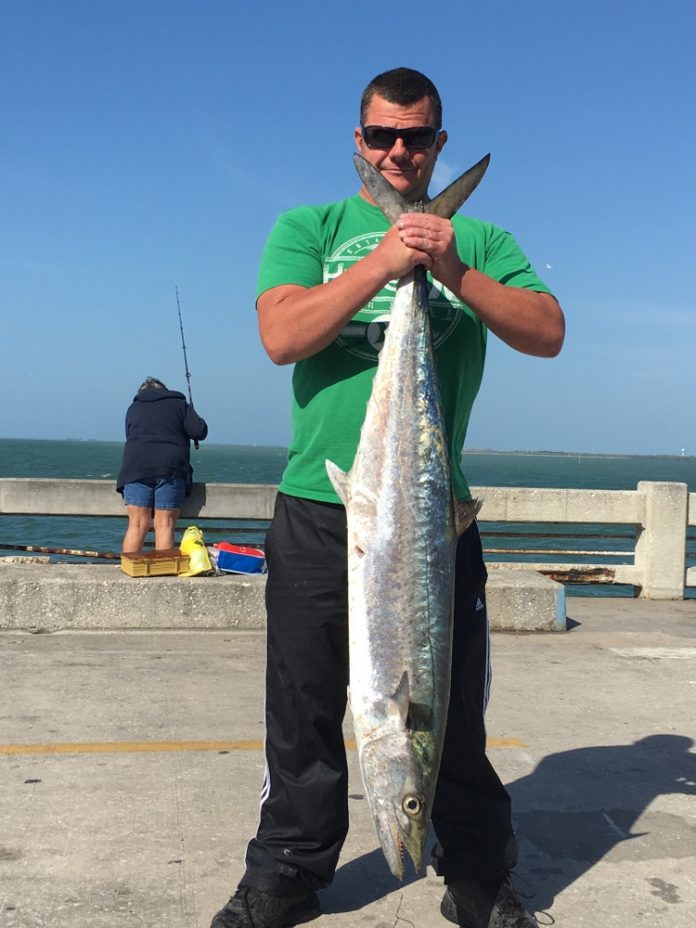 The first extended weekend of the summer travel season has arrived and many species will be biting for visitors at the Sunshine Skyway Fishing Piers.  Spanish mackerel have been taken in reliable numbers, especially during late afternoon / early evening time frames.  The mangrove snapper bite remains good in the overnight hours and some nice fish are even being taken during the day.  Cobia have been spotted in good numbers over the past week, with several fish landed and many others breaking-off on light tackle.  Snook, spotted seatrout, flounder and ladyfish have been common catches for anglers free-lining live baits in the shallows.  Sharks, tarpon and goliath grouper are satisfying the urge to do battle for big game anglers.  Finally, large shrimp have joined the blue crabs & pass crabs for anglers dip-netting during evening hill tides.

Spanish mackerel were present in good numbers at certain times and more difficult to pattern at other times.  The mackerel action seemed mostly dictated by the presence of the more powerful tidal flows, and by far the best water movement this past week was in the late afternoon /  early evening period.  This meant that several hours each afternoon provided good mackerel action, while other times fish were scattered & tough to pattern.  Small to medium scaled sardines fished live or as cut strips beneath a float took many of the mackerel this past week.  Artificial lures like silver spoons, white nylon jigs, larger sabiki-style rigs and Gotcha lures also performed well during peak tides.  Some anglers who found extremely clear water thought that reducing leader material from 25 lb. fluorocarbon down to 15 lb. or 20 lb. got them a few extra fish and were willing to accept some bite-offs for the increased action.

Cobia were spotted in good numbers by visiting anglers over the past week.  Although only a few fish were actually landed, there appears to be a good chance to connect with this fish that rates so high with anglers for both its powerful fight & fine table performance.  Cobia love to hang around any form of structure in the area.  At the Skyway Piers, this often means fish are seen following big grass patches (or other flotsam) being swept along with the tide or even holding underneath the sea turtles that so often visit.  If fish are free-swimming, then it is even more likely that they will hold for a least a few minutes near pier pilings as they cross underneath – especially the double and X-shaped pilings that produce some shade.  Cobia are often aggressive and many anglers simply keep a stout spinning rod rigged with a white bucktail jig to cast in front of their nose.  If the jig is turned down, a large lively pinfish will often trigger a strike.

Mangrove snapper were good during both daytime & overnight hours and continue to be joined by large Key West grunts in helping produce fish fillets for the deep fryer.  Mangrove snapper were running from 10” – 13” on average, but plenty of bruisers exceeding 15″ are hitting the concrete each night.  Live or freshly dead shrimp was a great choice this past week, but was followed closely by cut scaled sardines or threadfin herring.  Some anglers are prepared with multiple baits, using shrimp whenever pinfish are scarce and switching to cut baits if the shrimp are too easily picked-off.  Key West grunts joined mangrove snapper as they schooled along the artificial reefs on the outgoing tide.  Cut baits and shrimp will take grunts, but some anglers prefer freshly cut strips of squid when the grunt action heats up.

Tarpon, sharks and goliath grouper of various sizes are providing great sport for shore-bound big game anglers.  Visitors seeking screaming drags and sore backs were rewarded over the past week.  Free-lining large live & dead baits such as ladyfish, jack crevalle and stingrays took most of the sharks & goliath grouper.  Tarpon were partial to a free-lined pinfish swimming right around the tide change or jigs buzzed along the shadow line.

The Skyway Fishing Piers are an exciting and economical place to spend quality family time this summer.  The piers are located along I-275 at both sides of the mouth of Tampa Bay.   Families can park their vehicles just a few feet from their chosen fishing spot, and several restroom facilities are located along each fishing pier. Food and drinks are available for purchase, along with a great selection of bait & tackle. The piers and bait shops are open 24 hours a day and 365 days a year.