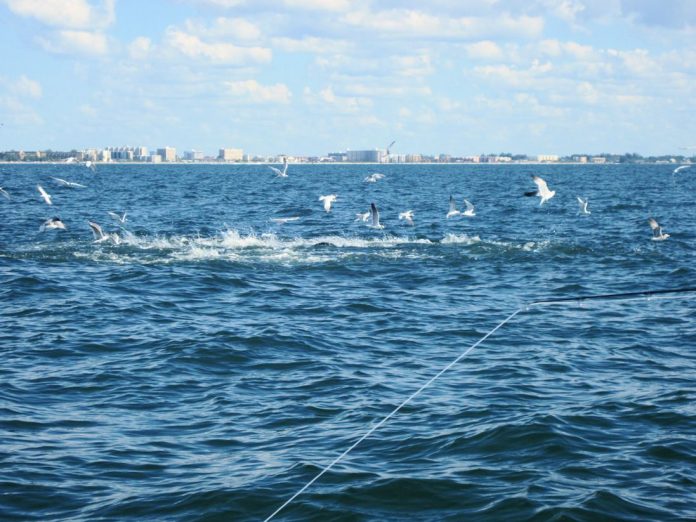 As we get deeper into the fall fishing season at the Sunshine Skyway Fishing Piers, each passing week seems to bring a slightly stronger cold to the Tampa Bay region.  Fortunately, many of the best fall bites at the piers are actually triggered by both the cooler water temperatures and wave action often associated with frontal systems.  Spanish mackerel are almost always the top fall target at the piers and the bite remained strong once again this past week.  King mackerel have been spotted and even some runs reported as king anglers are still talking ‘any day now’…  Reef fishing remains strong and anglers employing tactics for stained water took many nice Key West grunts, gag grouper, lane snapper and assorted porgies.  Jack crevalle, ladyfish, bluefish and blue runners are providing great action for the many anglers who enjoy casting artificial lures at the piers.  Sharks, goliath grouper and even tarpon remain around for visitors looking to do battle with a Skyway Pier leviathan.

Cold fronts most often bring strong north winds blowing the water out of Tampa Bay.  Unfortunately, these same winds stir up sediments, and when combined with any runoff from rains often associated with frontal systems, they tend to cloud the waters at the mouth of the bay.  Spanish mackerel are essentially sight feeders, but can also be influenced by both scent & sound.  Sight should be the first thought of the successful mackerel angler at the piers – first by seeking the clearest water available and second by using methods that best allow the mackerel to see the offering.  When using popular artificial lures like spoons & Gotcha lures, consider switching to gold or white patterns versus the ever-popular silver patterns.  Also, slow the presentation down slightly in order to give the fish an easier target to attack.  Scent and sound can also come into play as some anglers might choose to use cut strip baits on a long shank hook and others might choose to use a popping cork with either natural baits or artificial lures to attract mackerel.

Most Spanish mackerel this week were taken by artificial lure approaches, and this likely had a lot to do with the fact that schools have been rapidly moving along the pier structure.  Mackerel reports this week varied all the way from 2 or 3 fish to full 15 fish limits.  The end sections of both fishing piers were most productive, but some fish were caught along the entire lengths.  Very few anglers who focused their efforts on mackerel went home empty-handed.  Incoming and outgoing tides both produced fish, and the first strong water movement following a tide change seemed to produce the greatest action.  Early and late in the day also remained the best for numbers of fish and this year’s trend of fish being caught right up to dark continued as well.  Live and natural baits (mostly live or cut medium-sized scaled sardines) also had their times in the spotlight.  Whenever Spanish mackerel remain in a certain area, these baits will produce.  Indeed, some of the best anglers at the piers almost always set a natural bait rod with a medium light drag setting while they are casting artificial lures.

The artificial reefs that line both fishing piers remained great for multi-species action.  Gag grouper were the main target and anglers set forth both natural & artificial bait approaches with success.  The storyline of lots of short grouper continued, but this past week definitely saw a marked increase in the number of legal-sized gags both sighted & reported.  The most successful methods remained the pier staples of diving plugs and free-lined live pinfish, but some larger dead baits like blue runners and whole squid also took nice fish this week.  Anglers who enjoy plug fishing went to larger plugs and often favored red & white patterns in stained water.  Larger plugs give an easier target when clarity is poor and anglers who often favor shades of silvers with stripes in clear water sought more color contrast.  Other reef species like snapper, grunts and porgies were taken on cut squid, sardines and shrimp.  Many of these grunts & porgies are fantastic eating and should be considered by all visitors who enjoy a family fish fry.

Visiting anglers who enjoy jig or plug fishing for multiple species are having a blast at the Skyway Piers.  Aggressive fish like jack crevalle, ladyfish and bluefish were all taken by artificial lures over the past week.  These fish are all great fighters, but many folks do not give them enough consideration for the table.  Ladyfish, for example, are often shunned as a bony fish best-suited for live or cut bait.  Ladyfish have some of the whitest & mildest flesh of any species in the Tampa Bay Estuary.  When frozen for about an hour, filleted directly down the side and then the flesh of each fillet of scraped free of bones with a spoon, this fish makes some of the best fried fish patties available.  Mix with panko-style bread crumbs and your favorite spices and then deep fry.  Dip in your favorite sauce for a true bay delicacy.  Jacks and bluefish are also great when bled upon catching and then removing the lateral line while cleaning.  Both species have firm fish that will withstand grilling or use in soups & chowders.