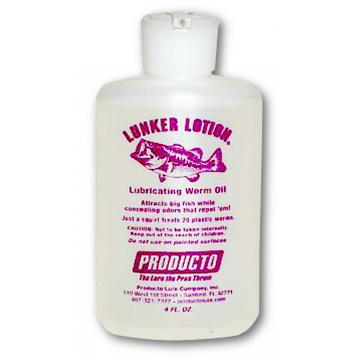 This one, a product by Producto Lure:  Producto, owner of 12 Fathom, the lures I use.    The factory is in Sanford so I make regular visits.   Part of my time there:  Pouring Lunker Lotion.   I probably have a hundred hours into pouring the stuff.     I pour it, they stock it up for orders.

It comes in four-ounce bottles.   It sells well with the freshwater worm guys around the country.   It sells well with the hunters who use the scent around their hunting camps.   It is more like an oil than a lotion.   It does not have an offensive smell.   Craig wipes the bottles down after bottling.   Probably a good idea because that residue could stain things, although only very lightly.   With the cap screwed on tight, these bottles don’t leak.   It is a well packaged product.

Less “scent” than lubricant, to me adding Lunker Lotion to my plastic lures has two good applications.    It does kill the factory scent on the lures, particularly good if you are using your plastics for redfish.    The second benefit is that it will make plastic lures last forever.     They are not going to get too dry and deteriorate.    The Lunker Lotion doesn’t go away.     It doesn’t evaporate.

I would say it probably does “make lures taste better.”    Like I said, there are machine smells that can linger on plastics after the production process.   Lunker Lotion neutralizes the factory scents.

For all my spare lures I’ve accumulated, I have added the Lunker Lotion to them so that they will last forever.    My lures are in tackle trays.

Producto describes Lunker Lotion in one sentence:    Lunker Lotion is formulated to soften plastic and restore color sheen. A must have for the worm fisherman.

A good one to consider:   Add Pro Cure to your Lunker Lotion.    The samples they sent for the Captain Mel Classic, I took some of the extras and “scented my Lunker Lotion.”   This makes it a more true “scent” additive.   I don’t think it matters which flavor Pro Cure you use.    When you mix them together, put the lid on and shake it for a while.    Then, shake it before you use it.   When I add my Lunker Lotion/Pro Cure mixture to lures, I bag them instead of putting them in my tackle trays.    I think being able to seal that bag and let the lures marinate in there without any air getting to them is a better way to do it.

From my observations, it might serve as a good “bug bait” to lure and kill roaches.    There is something about it the big roaches like.   They go to it, they drown in it.   I have successfully used it in this way on a trial after seeing a dead roach in the tub at the factory.

Neil is a guide in the Tampa Bay region, taking people in kayaks.    Neil has used 12 Fathom Lures for about 14 years.     Read all of Neil’s other articles on the 12 Fathom Lures